The Magnolia Sword by Sherry Thomas

A Warrior in Disguise

All her life, Mulan has trained for one purpose: to win the duel that every generation in her family must fight. If she prevails, she can reunite a pair of priceless heirloom swords separated decades earlier, and avenge her father, who was paralyzed in his own duel.

Then a messenger from the Emperor arrives, demanding that all families send one soldier to fight the Rouran invaders in the north. Mulan's father cannot go. Her brother is just a child. So she ties up her hair, takes up her sword, and joins the army as a man.

A War for a Dynasty

Thanks to her martial arts skills, Mulan is chosen for an elite team under the command of the princeling--the royal duke's son, who is also the handsomest man she's ever seen. But the princeling has secrets of his own, which explode into Mulan's life and shake up everything she knows. As they cross the Great Wall to face the enemy beyond, Mulan and the princeling must find a way to unwind their past, unmask a traitor, and uncover the plans for the Rouran invasion . . . before it's too late.

THE MAGNOLIA SWORD follows Mulan, trained by her father in the sword so she can fight in a duel against the person whose family holds the companion to her own sword.

The opening chapter is gripping, launching immediately into actions determined before the story opened. That intense start brought me fully into Mulan's perspective as a character, making it feel like I understood her very quickly even before the main plot kicked off. The initial fight is itself important to the story, being one of several fights between Mulan and the person whom she has known for years she must duel.

Mulan is anguished when she learns a secret which upends her understanding of her family's past. Over the course of the story she returns to the revelation intermittently, grappling with it and its implications. It has the potential to change or destroy her relationship with someone in her family, but she has a long time in the story before she has to confront one consequence of this information. It's shown in enough detail to convey its importance and emotional intensity for Mulan, but it leaves room for other parts of the story to flourish, and I'm very pleased with how that balance turned out.

I love the rapport between Mulan and the princeling, as well as between them and the rest of their close-knit team as they travel long distances. There's comradery and affection between them as they trust each other to guard their backs.

Often I get frustrated when a character spends a long time just not realizing an extremely obvious coincidence is actually happening, e.g. that the swordsman she's been dueling in preparation for their big duel is also another named character who she meets later and ends up knowing much better. I was pleasantly surprised that Mulan's immediate reaction was to ponder this same thing, and so I was able to enjoy her trying to figure out if she was right, like we were both solving this mystery. It fit her character that she would have this curiosity and the tenacity to not let the thought go until she was able to determine the answer one way or another.

Mulan's relationship with her father has been filled with uncertainty on her end as to whether her father loves her and sees her as a person. He has her dress as a boy and use her dead twin brother's name in public, so thoroughly that anyone outside the family would think the she, the sister, had died instead. This is part of why her deception when conscripted worked so thoroughly, the official census still indicated the boy was alive and could answer when the family needed to present a male to the army.

The audiobook narrator is excellent, acting the voices distinctly and in an engaging manner appropriate to the story. There are several distinct plot threads which complement each other beautifully: the duel and Mulan's family's past; Mulan as a fighter and the invasion she was conscripted to fight, and Mulan's relationships with the princeling and their fellow soldiers. Many events work towards more than one of these threads, making them almost too close to pull apart at all. 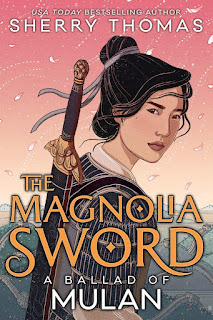