Sierra Santiago planned an easy summer of making art and hanging with her friends. But then a corpse crashes the first party of the season. Her stroke-ridden grandfather starts apologizing over and over. And when the murals in her neighborhood begin to weep real tears . . . Well, something more sinister than the usual Brooklyn ruckus is going on.

Where the powers converge and become one

With the help of a fellow artist named Robbie, Sierra discovers shadowshaping, a thrilling magic that infuses ancestral spirits into paintings, music, and stories. But someone is killing the shadowshapers one by one -- and the killer believes Sierra is hiding their greatest secret. Now she must unravel her family's past, take down the killer in the present, and save the future of shadowshaping for herself and generations to come.

SHADOWSHAPER blends real and fantastical elements, grounding it in specific locations in Brooklyn, NY. I'm unfamiliar with that city and I don't know which ones were real and which were made up for the setting. The characters share a local culture but late in the book they have a conversation about how their backgrounds differ even within this one place.

The details about the Shadowshapers as a group are revealed agonizingly slowly. It's a pace where Sierra was more stressed than I was because what I took as a slow burn, Sierra (rightfully) understood as actively being denied a piece of her culture and knowledge of a massively influential force within her family because she's a girl. She ends up feeling like an outsider in her own family, needing help from a boy who happens to know more because he was given access to this knowledge when she was kept out. I felt her frustration at the exclusion, and her determination to keep going with whatever she had.

I read this as an audiobook, and the narrator's performance helped with my immersion into the story. The ending works well, tying off this story while leaving room for more as the series continues. I'm interested in what's next for the Shadowshapers and I plan to keep reading the series. 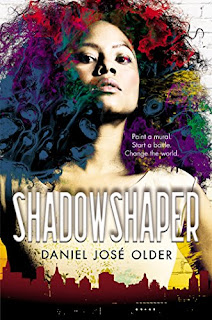