One thousand years ago, the great Kami Dragon was summoned to grant a single terrible wish-and the land of Iwagoto was plunged into an age of darkness and chaos.

Now, for whoever holds the Scroll of a Thousand Prayers, a new wish will be granted. A new age is about to dawn.

Raised by monks in the isolated Silent Winds temple, Yumeko has trained all her life to hide her yokai nature. Half kitsune, half human, her skill with illusion is matched only by her penchant for mischief. Until the day her home is burned to the ground, her adoptive family is brutally slain and she is forced to flee for her life with the temple's greatest treasure-one part of the ancient scroll.

There are many who would claim the dragon's wish for their own. Kage Tatsumi, a mysterious samurai of the Shadow Clan, is one such hunter, under orders to retrieve the scroll ... at any cost. Fate brings Kage and Yumeko together. With a promise to lead him to the scroll, an uneasy alliance is formed, offering Yumeko her best hope for survival. But he seeks what she has hidden away, and her deception could ultimately tear them both apart.

With an army of demons at her heels and the unlikeliest of allies at her side, Yumeko's secrets are more than a matter of life or death. They are the key to the fate of the world itself.

Yumeko spends a lot of time hiding the fact that she's half kitsune, with repeated references to how she's averting her instinctual reaction of doing magic when she's in danger, and making sure to avoid reflections (e.g. water, mirrors) because her ears and tail will be visible in them. I love how Yumeko gradually collects people and decides to journey with them while Tatsumi only barely avoids constantly feeling frustrated because he has to keep from showing any emotions at all. It's a great grumpy/sunshine dynamic and I enjoyed it immensely. At first I was a bit frustrated by Tatsumi's "no emotions" routine, but gradually it becomes apparent that he isn't actually emotionless and that the Shadow Clan conditioning him to be this way is actually a combination of emotional abuse and literal torture. He carries a demon-possessed sword which will take him over if it can get a strong emotional reaction from him (and it can do some damage with even mild emotions).

The worldbuilding is gradual, with Yumeko often serving as the mouthpiece because she's excited to explain whatever now-relevant thing the monks had taught her. Having two main characters with occasional other points of view for brief stretches allows for a lot of worldbuilding conveyed through the different ways they view what's happening. Occasionally when the perspective switches there will be an overlap in the scenes to convey at least what the second narrator thought about what happened, with only minor duplications when describing the events.

A few minor characters are portrayed in frustrating ways, such as in an early incident where a canonically fat character describes a (now dead) yōkai as the only one who ever loved him. He’s then almost immediately killed. I think his size was supposed to indicate that he used his wealth to hoard resources, especially when a later section comments on how farmers often starve for at least part of each winter, but it comes across as fatphobic when combined with his lament.

The three narrators for the audiobook work well, with one narrator each for Yumeko's and Kage Tatsumi's perspectives, then the third narrator for other points of view. The plot follows their travels from one temple to another, and the battles they fight along the way. By the time they get there, several events have created a new goal for them which I assume is the subject of the next book. The overarching goal of the trilogy as previewed here is to keep anyone from using a scroll (which was split into pieces and hidden at several temples) to summon the Kami dragon. I'm very interested in where this goes next, I enjoyed the characters and the cliffhanger ending promises answers which I very much want. 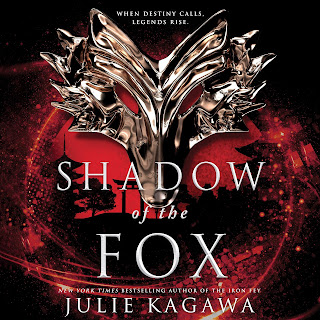