The Wolf Among the Wild Hunt by Merc Fenn Wolfmoor

Skythulf wants to live. Raised in the fight pits, trained to kill or be killed, he yearns for freedom that's out of reach. He's a scythewulf: a wolf-shifter considered neither fully man nor beast, his life worth nothing to his keepers…until Brennus, knight-champion of Saorlland, rescues him from certain death and offers him a new life.

When he mistakenly kills a corrupted nun, Skythulf has one chance to redeem himself and restore his honor. He must run with the Wild Hunt: an age-old trial of blood and courage, where every step hides peril and carnage. If he survives, he will be pardoned. If he fails, Brennus will die brutally at his side.

Few have ever returned from the fae-haunted land, where horrors unnamed dwell beside the enchanted and the damned. There is no rest, no relent, and no mercy. In the Wild Hunt, you run or you die.

Skythulf is a tough and endearing protagonist. He's that perfect mix of physically confident but emotionally vulnerable which makes the scenes with Brennus, his best friend and liege, really shine.

The worldbuilding is sketched well, giving just enough detail to feel lush in the small space of a novella. The accompanying illustrations perfectly fit the mood of the text. The sections in the forest during the Wild Hunt are particularly good, as are the flashbacks. Specifically, I love the way that the flashbacks are placed throughout, positioned to so they answer, implicitly or explicitly the trajectory of some emotion which has been expressed in the present.

The Wild Hunt itself is great, it would be my favorite thing were it not eclipsed by the bond between Skythulf and Brennus. I love the ending, it looks like this is intended to be a series and I hope that happens. 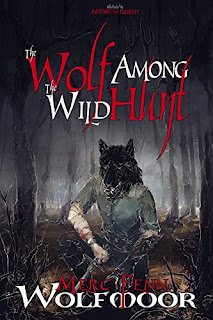