It would be easy to underestimate Chloe Sevre… She’s a freshman honor student, a legging-wearing hot girl next door, who also happens to be a psychopath. She spends her time on yogalates, frat parties and plotting to kill Will Bachman, a childhood friend who grievously wronged her.

Chloe is one of seven students at her DC-based college who are part of an unusual clinical study of psychopaths—students like herself who lack empathy and can’t comprehend emotions like fear or guilt. The study, led by a renowned psychologist, requires them to wear smart watches that track their moods and movements.

When one of the students in the study is found murdered in the psychology building, a dangerous game of cat and mouse begins, and Chloe goes from hunter to prey. As she races to identify the killer and put her own plan for revenge into action, she’ll be forced to decide if she can trust any of her fellow psychopaths—and everybody knows you should never trust a psychopath.

General Vibe: THEY NEVER LEARN with the party size of EVEN IF WE BREAK (and a bit less queer)

I don't have any basis of expertise to evaluate whether the depictions of psychopathy are accurate or inaccurate. I enjoyed the book and the information fits some things I already knew, as well as explaining a bunch of new stuff, but it's not trying to be a psychopathy explainer except in as much is necessary to understand the characters.

The narrative style is a bit unusual. There are several main characters whose perspectives are shown as point-of-view characters. But only Chloe narrates in first-person, the others use third person. This creates detachment and uncertainty, which works especially well when Chloe suspects most of them of being the murderer at one time or another. I like Chloe, Charles, and Andre, they're a solid trio in the narrative, even as their individual relationships with each other are very different throughout the text. They make sense as people, which is important in a story which revolves around a bunch of characters having the same mental health diagnosis. Chloe has her own way of being a psychopath which is distinct from the others, with these traits often helping but just as frequently getting in the way of her goals. I like her as a character, and Charles has his own charm, but Andre is my favorite of the main three.

By focusing on characters who are diagnosed with psychopathy, the narrative takes advantage of an opportunity for a wonderful mix of showing and telling. Chloe knows that certain of her traits are because of her psychopathy, but that doesn't make her better at controlling her impulsiveness (at least not this early in the program).

This is a solid mystery, very thrilling. The twists and turns make sense without being immediately guessable. Part of what helps is there are lots of bad actors in addition to the actual murderer, so it becomes a matter of figuring out who is doing a bunch of bad things, whether they're doing one or several of them, and whether any of them are enough for that person to make sense as the killer. 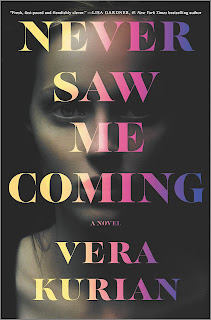