It was just another day at the beach. And then the world ended.

Mike and Beth didn’t know each other existed before the night of the meteor shower. A melancholy film producer and a house sitter barely scraping by—chance made them neighbors, a bottle of champagne brought them together, and a shared need for human connection sparked something more.

After a drunken and desperate one-night stand, the two strangers awake to discover a surprise astronomical event has left widespread destruction in its wake. But the cosmic lightshow was only part of something much bigger, and far more terrifying.

When a set of lost car keys leaves them stranded on an empty stretch of Oregon coast, when their emergency calls go unanswered and inhuman screams echo from the dunes, when the rising tide reaches for their car and unspeakable horrors close in around them, these two self-destructive souls must band together to survive a nightmare of apocalyptic scale.

BLACK TIDE features two almost-strangers suddenly trying to survive after a meteor shower that left behind very strange things on the beach.

Early on I realized what it's horror novel treatment of, and I don't really want to spoil it except to say that any of my fellow exvangelicals might find something you recognize. You don’t need to figure it out to understand the book, however, since it’s using that sequence of events as the bones in a wonderfully horrific creation. It's from the perspective of two characters who aren’t already familiar with the shape of what’s to come, who have no way to guess the truly twisted shit that’s going down.

The characters have the kind of communication errors which completely fit people who met yesterday and have very little emotional energy to navigate interpersonal dynamics in addition to trying to stay alive. It's just enough to feel real but doesn't bog down the story. The worldbuilding is very good, with the characters slowly figuring out what's happening and some strategies to deal with immediate dangers, but lacking any ability to fix things more broadly. This is a very good horror novel and I'm quite pleased overall. 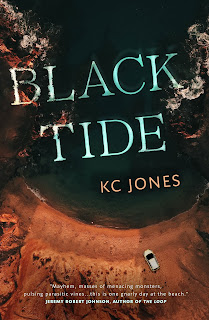