In the dark, gothic town of Wickdon, Maggie Welty lives in an old creaking manor. Maggie’s mother is an alchemist who has recently left town, leaving Maggie with just her bloodhound for company. But when Maggie spots a legendary ancient fox-creature on her porch, her fate is changed forever. Whoever tracks down and kills the hala in the Halfmoon Hunt will earn fame and riches – and if Maggie wins the hunt, she knows her mother will want to celebrate her. This is her chance to bring her home.

But the rules state that only teams of two can join the hunt, and while Maggie is known as the best sharpshooter in town, she needs an alchemist.

Enter Wes Winters. He isn’t an alchemist … yet. Fired from every apprenticeship he’s landed, this is his last chance.

Maggie and Wes make an unlikely team – a charismatic but troubled boy, and a girl who has endured life on the outskirts of a town that never welcomed her. But as the hunt takes over, the pair are drawn together as they uncover a darker magic that may put everything they hold dear in peril…

A FAR WILDER MAGIC is a deliciously slow burn fantasy romance, getting well past the halfway point before the first longing touch; full of indecision, regret, and hope. Maggie needs Wes's help in order to enter the Halfmoon Hunt and bring down the hala, an immortal creature that some religions say is part of god, and others say is a gift from the divine.

The narration is split between Wes and Maggie, and the balance is good. I like them both as narrators. This is definitely a place where the audiobook shines, as the audiobook narrator gives them distinct voices which fit the way their tone is described by the text.

Maggie's relationship with her (currently absent) mother looms large. The reasons for her mother's absence and obsession with alchemy is gradually unfurled as Maggie gets to know Wes and begins to fall for him. Wes's relationships with his sisters and mother are also very important to the story, but as a mostly positive influence. I like Wes's family, they're pretty great and I enjoyed his rapport with them. Maggie's mother is an excellent character and a pretty frustrating person. It takes Maggie a very long time to be able to recognize her mother's treatment of her as neglect and emotional abuse, with Wes calling it out long before Maggie is ready to deal with it on those terms.

The romance is a very slow burn. I've read slower, but only in books longer than this one. Maggie and Wes are great together, but first they have to get out of their own way about a lot of things. Maggie's anxiety felt realistic, and the romance isn't treated as a cure for it.

The worldbuilding is gradual in terms of character backgrounds, but pretty immediate for the town of Wickdon and the manor where Maggie lives. Maggie's background is definitely meant to be that she's this universe's version of half-Jewish, something that's more shown through the particularities of the bigotry against her more than its shown through any cultural or religious practices that I picked up on. She mentions a few things about her father, and most of the cultural touchstones I could recognize happened when she's thinking about him or talking about something he taught her. Wes is some version of Catholic, as best as I can tell, and the bigotry against him echoes the bits of anti-Irish and anti-Catholic bigotry that I'm aware of as someone who isn't Irish, Catholic, nor Jewish. A major part of Wes's storyline is about figuring out how to navigate the sea of local bigotry which Maggie has grown up in, informed by how he's used to handling it back home. It's very much about him and Maggie figuring out to exist together and what to do about their feelings for each other, but having to deal with bigots is a huge part of the narrative. I'm not in a position to say whether it was done well on a larger level, but I like how it worked in the story and I'm very pleased with how things turn out.

The narration is chock-full of metaphors, usually but not always similes. I didn't mind it, but by the end I was wondering if the characters were going to run out of ways that the color of each other's eyes could be like an entirely different substance, usually a pleasing food or drink. It's done well, I think, but I was starting to notice it each time as I got closer to finishing the story.

I was pleasantly surprised by the pacing. It's several weeks before the hunt begins, and the hunt itself plays out over several weeks because of various ceremonial and preparatory stages. I like the plot and I love the ending. 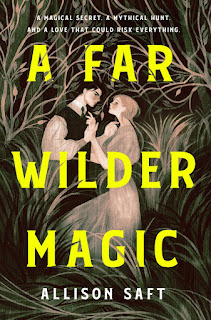