They Never Learn by Layne Fargo

Scarlett Clark is an exceptional English professor. But she's even better at getting away with murder. Every year, she searches for the worst man at Gorman University and plots his well-deserved demise. Thanks to her meticulous planning, she's avoided drawing attention to herself—but as she's preparing for her biggest kill yet, the school starts probing into the growing body count on campus. Determined to keep her enemies close, Scarlett insinuates herself into the investigation and charms the woman in charge, Dr. Mina Pierce. Everything's going according to her master plan...until she loses control with her latest victim, putting her secret life at risk of exposure.

Meanwhile, Gorman student Carly Schiller is just trying to survive her freshman year. Finally free of her emotionally abusive father, all Carly wants is to focus on her studies and fade into the background. Her new roommate has other ideas. Allison Hadley is cool and confident—everything Carly wishes she could be—and the two girls quickly form an intense friendship. So when Allison is sexually assaulted at a party, Carly becomes obsessed with making the attacker pay...and turning her fantasies about revenge into a reality.

THEY NEVER LEARN is a sapphic serial killer thriller about two women getting control and taking revenge.

The narrators alternate between an English professor getting ready for her yearly kill and a freshman who plans revenge after her friend is assaulted. Carly and Scarlett feel distinct at the start of the book and their chapters are very easy to tell apart. Early on I liked Carly better but by the end I was rooting for Scarlett and I'm very happy with how things turned out. If you liked (or wanted to like) DEXTER but wished it were sapphic, check this out.

There's enough detail to make it very clear what the various perpetrators/murder victims did that got them on Scarlett's radar or drew Carly's ire, but without glorifying sexual violence or giving graphic details of abuse. Refer to the CWs for more information. 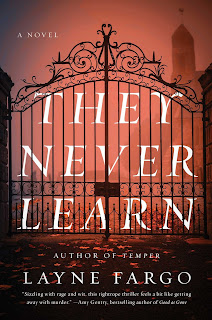