Branded a traitor, betrayed by a friend, hunted by the vampire clan-Darren Shan, the Vampire's Assistant, faces certain death. Can Darren reverse the odds and outwit a Vampire Prince? Darren's initiation on Vampire Mountain draws to a stunning, bloody conclusion-but the Saga continues...

THE VAMPIRE PRINCE forces Darren to decide whether to flee for his life, or return to warn the vampires and face punishment for his failure.

I was pleasantly surprised by how much new worldbuilding occurs in this book, especially this far into the series and as the finale of a discrete arc. We learn much more about the wolves near the mountain, and later on get much more information related to the Vampaneze and their motivations.

It wraps up some very major things which were left hanging from the previous two books. It has a new storyline which was set up by the ending of the last book. It resolves a lot of stuff, but I don’t think anything major was both introduced and resolved here. It’s definitely part three of three for a mini-arc within the series as a whole. The ending changes the status quo in a way that has very interesting implications for what could happen next. Darren is still the narrator, and his tone is gradually maturing as he’s changed by what happens and how he processes these experiences.

The prologue does a good job of serving as a reminder of prior events for anyone who waited a while between books, but the last good entry point was definitely VAMPIRE MOUNTAIN. This technically could stand on its own and make sense in terms of the main plot, but the ending specifically resolves things from the last two books in a way that makes them necessary for the ending to be emotionally satisfying.

The plot focuses on Darren’s escape, rehabilitation, and then return to the mountain. It has a good balance between calm and action, with Darren taking some time to recover before attempting to warn the vampires about what he discovered at the end of the last book. I like how focused it is, how this completes a trilogy within the series. Darren has been changed by his recent experiences, and he gets time for self reflection here which helps those changes become explicit rather than remaining as slow shifts in the narration. The ending is devastating, filled with grief in a way that's more complicated and on a grander scale than in THE VAMPIRE'S ASSISTANT. This series has followed Darren as he slowly learns that things overall can become profoundly worse at the same time that little things improve. He's growing up in a way that the earlier books hadn't forced him to yet, but his specific growth here is built on everything that came before.

I love this one, it's so important for the direction of the series as well as being an excellent story in its own right. 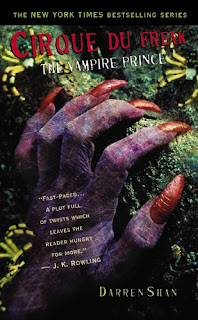