When archivist Sol meets Elsie, the larger than life widow of a moderately famous television writer who’s come to donate her wife’s papers, there’s an instant spark. But Sol has a secret: he suffers from an illness called vampirism, and hides from the sun by living in his basement office. On their way to falling in love, the two traverse grief, delve into the Internet fandom they once unknowingly shared, and navigate the realities of transphobia and the stigmas of carrying the “vampire disease.”

Then, when strange things start happening at the collection, Sol must embrace even more of the unknown to save himself and his job. Dead Collections is a wry novel full of heart and empathy, that celebrates the journey, the difficulties and joys, in finding love and comfort within our own bodies.

DEAD COLLECTIONS is an exploration of memories and identity via a Jewish trans vampire living in his office as an archivist, falling in love with a widow who drops off a collection for the archive.

This feels so wonderfully believable and specific in every little detail, from the attempt at safety which led to Sol living at work, to the messiness of Elsie exploring new love as she deals with the stuff left behind after her wife’s passing. Sol and Else talking, laughing, and fucking, with the background issue of Sol dealing with things at work.

The worldbuilding is subtle and minimalistic, basically modern times but where vampires exist and are known to medical science. It grounds itself in a time and a place (but with vampires) and then doesn't try to explain what the place means, but lets itself just exist.

The audiobook narrator is great. There’s a bit a little past halfway through involving several people’s emails back and forth, and it’s a pretty serious moment, but there’s a memetic quality to the way the narrator reads it. If you like audiobooks then definitely give this one a shot, as their performance works so well with the story and the characters.

I love this so much, it's a fantastic premise, well executed, and the whole thing is just so perfect. 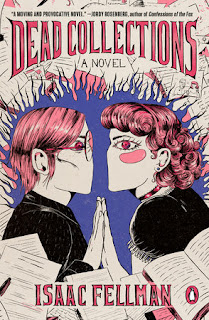