Koushun Takami's notorious high-octane thriller is based on an irresistible premise: a class of 42 junior high school students are taken to a deserted island where, as part of a ruthless authoritarian program, they are electronically collared, provided with weapons of varying potency, and sent out onto the island.

If they are in the wrong part of the island at the wrong time, their collars will explode. If they band together to save themselves a collar will explode at random. If they try to escape from the island, they will be blown up. Their only chance for survival lies in killing their classmates.

BATTLE ROYALE is the story of forty-two kids pitted against each other in a fight to the death as part of an authoritarian program to see what they do to each other. It's ostensibly data for data's sake, cruelty justified by requiring numbers to crunch.

I generally have a lot of trouble with character names, but by the midpoint I was able to recognize the most important ones. In the interest of avoiding spoilers, I'll discussing my favorite characters based on general descriptions rather than names. There's "murder boy", which I know ought to be a meaningless moniker in this setting, but he's the one who is described as not having emotions, and decides to partake in the violence based on what might as well be a coin flip in his mind. I have some concerns with this as a portrayal of neurodivergence and/or mental illness, I lump those together when discussing this character because part of the problem is that aside from discussing him as an emotionless and then murderous person there isn't much to go off of. He's clever and methodical, with a savvy about the game which is mostly implied by the way other characters can tell he's succeeded in an encounter with someone who is now dead. My favorite character is guy with a best friend (whom he's not dating). I also like the main trio of characters, the narrative tends to flip between one of the guys in that trio and then moves to one of the other characters before coming back to him.

The web of relationships between forty-two teenagers on the government-run murder island is complicated, and tends to revolve around who likes whom, who the bullies are, which one of them has the bulletproof vest, or who is seeking catharsis in unleashing a hail of bullets. The misunderstandings, violence, assumptions, and last-ditch attempts to communicate a crush before impending the end of their lives are woven together expertly in a way that feels plausible given the setup. The fact that most of these kids have know each other for years in various classes before this means that every kill has personal context, no matter how much they might wish it didn't.

The worldbuilding is communicated in a mix of government propaganda, brief explanations of the current political situation and historical context, and off-hand things the characters say. There's a moment when one of the people running the scenario comments on how he's having his third kid to do his part to offset the declining birthrate. It's a small moment that tells so much about the setting. This one comment speaks to the insidiousness of the government's propaganda, the net effect of randomly killing off a set number of kids every year, and the gap between what the government may have wanted and the actual effect on the population. There are a lot of little moments like this, but that one has stuck with me. It tells so much about the mindset of this person helping hold up a horrific system, and it does so quickly, which is important since this is one of just a couple of times where an adult's perspective is shown.

A theme which the basic premise of the novel didn't prepare me for is the toxic combination of misogyny and the threat of rape as a weapon. I think it's handled very deftly, with a surprising amount of nuance. This throughline begins with an early reference to someone being raped at the government's order as part the program. I appreciate the way the novel as a whole engages with the horrors of sexual violence, and how it (in at least one case) can warp a person if they are unable to get help to deal with it. There are no scenes of rape in the book itself, but the fact that it's a tool of violence which is available to the teens on the island shows up several times.

The cadence of the plot provided periods of rest and some really touching scenes amidst the violence. These opportunities to learn more about the characters in turn made the death scenes more tense and emotionally resonant. Sometimes a character's perspective was shown for the first time right as they were about to die, and some characters appeared several times before someone took them out. I appreciated this mix because it kept up the pacing as a thriller and enhanced the dystopian themes all at once. I highly recommend this, and I'm very glad I read it.

A quick note since BATTLE ROYALE was written before THE HUNGER GAMES, but some comparison is warranted: there are a few tropes in common between the books, however the central dynamic in Battle Royale is that of a group of people who have known each for a long time before they are forced to kill each other. That difference alone means that these books feel and play out very differently. It also matters that the only audience in Battle Royale are administrators who have trackers but no cameras. It's not voyeuristic, they're not performing for a crowd, and they know everyone they kill. It's a commentary on authoritarianism instead of a critique of entertainment culture. 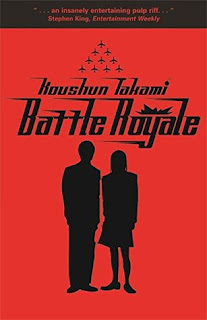