We owe our good health to a humble parasite -- a genetically engineered tapeworm developed by the pioneering SymboGen Corporation. When implanted, the Intestinal Bodyguard worm protects us from illness, boosts our immune system -- even secretes designer drugs. It's been successful beyond the scientists' wildest dreams. Now, years on, almost every human being has a SymboGen tapeworm living within them.

But these parasites are getting restless. They want their own lives . . . and will do anything to get them.

“He wanted to heal me and turn me back into a woman I had no memory of being. I wanted him to let me be who I was, no matter how different I had become. Neither of us was getting what we wanted.”

Sal was in a car accident six years ago and no longer remembers her life before the tapeworm which saved her life. Now she has a boyfriend she loves, a family she mostly gets along with, and a lot of medical testing from the company whose engineered parasite made her current existence possible.

I like Sal as a narrator. She's good at communicating things clearly when she's aware of them as factors, and that's very helpful in a story where a lot of the narrative tension at first is from the gaps between what she wants to do, what she can do, and what people expect of her.

Nathan is a great partner for Sal, they work very well together and I'm so glad that their relationship isn't fodder for tension in this already pretty stressful situation. Sal's family is doing their best to connect with her but they fundamentally view her as a replacement for the Sally they lost. Sometimes they view this as an upgrade, and sometimes they seem to resent the changes. Beverly is a very good dog and I like how she's used in the narrative.

Sal is much slower to figure out some things than how quickly it's possible for the reader to put things together from the available information. I happened to know the "twist" beforehand, but this is a book where knowing it ahead of time didn't matter because part of the point is that Sal refuses to connect certain dots. This lets it accompany any pace of reader awareness, since the reveal will make sense no matter when an observer figures it out.

I've read a lot of this author's work, both as Seanan McGuire and as Mira Grant. I like this book's version of the abrasive, hermitic scientist in a secret lab doing experiments that a powerful group doesn't want her to, as well as the overly chipper girl who's extremely comfortable with gun and can murder with a smile. They're appropriate archetypes for this story, with enough to distinguish them in this setting that they're familiar without being copies of characters in her other work. 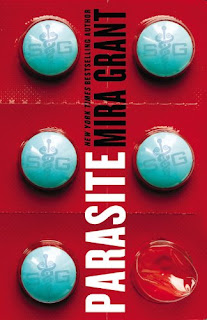