We Were Restless Things by Cole Nagamatsu

Last summer, Link Miller drowned on dry land in the woods, miles away from the nearest body of water. His death was ruled a strange accident, and in the months since, his friends and family have struggled to make sense of it. But Link's close friend Noemi Amato knows the truth: Link drowned in an impossible lake that only she can find. And what's more, someone claiming to be Link has been contacting her, warning Noemi to stay out of the forest.

As these secrets become too heavy for Noemi to shoulder on her own, she turns to Jonas, her new housemate, and Amberlyn, Link's younger sister. All three are trying to find their place--and together, they start to unravel the truth: about themselves, about the world, and about what happened to Link.

Unfolding over a year and told through multiple POVs and a dream journal, We Were Restless Things explores the ways society shapes our reality, how we can learn to love ourselves and others, and the incredible power of our own desires.

WE WERE RESTLESS THINGS is about the strangeness of grief, of continuing after someone else has stopped, and the impossibility of keeping someone happily where they don’t want to be.

Link died before the book opens, drowning in the woods, dying in a camera-shy lake that’s only sometimes there. His sister and friends slowly move into new configurations in his absence, jostled by the void he left behind. Complicating thing is the new kid, Jonas, who didn’t ask to fill Link’s seat but nevertheless must answer the implicit question of replacement.

By switching perspectives throughout, no one character takes over the narrative, and every one of them is described at least once through someone else’s understanding of them. One of the characters is working through her wants and needs as far as a romantic and/or sexual relationship, including whether she wants either, neither, or both of those things. It’s refreshing in a way that simply declaring a label at her introduction wouldn’t be. She has important conversations with other characters where they discuss the particulars of what any of this means for her, what their own desires mean for them, and it feels like it would help a reader maybe untangle some of their own thoughts on love and sex, including when and whether they’re separate. By the time more precise terms are used they get to be a succinct way to label what her words and actions have already made abundantly clear.

By the end I think Gaetan became my favorite character. Early on he’s shown from the perspective of characters who don’t understand him. When so much of the early book is through Jonas who just met him it means that the reader takes a long time to learn anything about Gaetan other than his bleeding edges which are sharp enough to cut. Jonas is sweet but aimless, bumbling into existing dynamics without pausing to assess the space before entering it. He tends to notice that his presence changed things, but often takes a long time to ask what was there before. By the time he does, the others have moved on to react to the new status quo.

I love the ending. It leaves the characters in a place that’s better than where they started, but without trying to fix everything that is wrong. 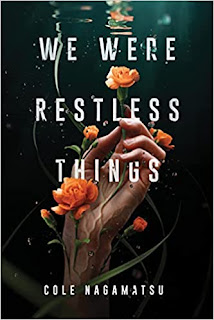