Wasp's job is simple. Hunt ghosts. And every year she has to fight to remain Archivist. Desperate and alone, she strikes a bargain with the ghost of a supersoldier. She will go with him on his underworld hunt for the long-long ghost of his partner and in exchange she will find out more about his pre-apocalyptic world than any Archivist before her. And there is much to know. After all, Archivists are marked from birth to do the holy work of a goddess. They're chosen. They're special. Or so they've been told for four hundred years.

Archivist Wasp fears she is not the chosen one, that she won't survive the trip to the underworld, that the brutal life she has escaped might be better than where she is going. There is only one way to find out.

Queer Rep Summary: Ace/Aro Secondary Character(s). Click the link for a brief comment from the author on aro/ace rep in ARCHIVIST WASP for those who are interested.

ARCHIVIST WASP is a journey of two lonely beings who don’t know how to drop their knives long enough not to wound after asking for help.

I love the blend of supernatural and technological pieces that build the post-apocalypse world of ARCHIVIST WASP. The titular Archivist, Wasp, hangs on to her life through sheer force of will at times as she tries to help Ghost find someone he lost before both of them died long ago. Wasp and Ghost slowly gain a synergy of understanding and movement through their temporarily shared purpose, shown partly through how Wasp is more and more able to understand and anticipate Ghost’s actions as they fight together for their lives with disturbing regularity.

This uses what in most other books would be shared memories, except Wasp is seeing the memories that Ghost has lost, meaning that he's sometimes strangely unsuited to helping her figure them out. Through these memories Wasp gains an understanding of a small piece of the pre-Apocalyptic world which Ghost inhabited, the shattering and slow decay of which built Wasp's own world.

I love the ending, it's more hopeful than I thought it'd be, and it works well.

I read this after having read FIREBREAK and therefore entered it full of bittersweet sorrow just from the synopsis. This was published first and can be read either first or second. It is not a new thing for the order of a series to be complicated, later books are set before earlier ones, but usually there's a sense of what is known and unknown in each of them. This is different. I cannot imagine what it would be like to read ARCHIVIST WASP without having first read FIREBREAK, for the parts of the ghost which are handed to me here are so linked that it feels like ARCHIVIST WASP is filling in the missing pieces, soothing the parts of me that were rent asunder by the saga of corporate greed and deep grief that is FIREBREAK. Having said that, I've done my best to review ARCHIVIST WASP on its own terms, as a book that was published before FIREBREAK and didn't know it would ever get a sequel, let alone the quasi-prequel/related stand-alone journey that is FIREBREAK, or the sequel that is LATCHKEY.

It’s my personal opinion that you’ll have a fulfilling experience whether you read this first or second, but if you prefer to feel like you have more answers before you at once, start with FIREBREAK and then you’ll be better prepared for ARCHIVIST WASP and then move on to LATCHKEY. If you’d like to feel as though you’re powerless to stop a tragedy whose ending was written long ago, but nevertheless still breaks your heart and makes you hope for a better future, begin with ARCHIVIST WASP and then you can read FIREBREAK (I suspect for this reading it would be better to follow publishing order and read LATCHKEY between them). 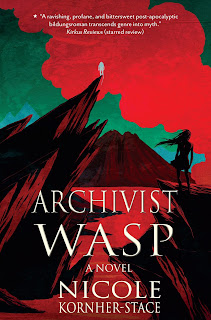