In the fourth book of the bestselling Cirque Du Freak series, Darren Shan and Mr. Crepsley embark on a dangerous trek to the very heart of the vampire world. But they face more than the cold on Vampire Mountain-the vampaneze have been there before them.

Will a meeting with the Vampire Princes restore Darren's human side, or turn him further toward the darkness? Only one thing is certain-Darren's initiation into the vampire clan is more deadly than he can ever have imagined.

In VAMPIRE MOUNTAIN, Darren and Mr. Crepsley travel to the Vampire Council meeting, along with one of Mr. Tiny's Little People, discovering interesting dangers and meeting even more interesting people in the process.

Visiting the Vampire Mountain provides a wonderful opportunity for a bunch of infodumps of vampire lore as Darren gets tours and history lessons as he waits for the official council meetings to occur. Various characters give him information, often with their own opinions and commentary on the official histories. This means that what might easily have turned into a bunch of lectures instead serves both as very important worldbuilding for the series and demonstrations of various characters’ mindsets about different aspects of Vampire society and their history with the Vampaneze. It’s wonderfully done, which is good since is a substantial portion of the book.

Harkat is one of my favorite characters and I'm so happy he shows up here!

Technically this wrapped up something left hanging from the last book… by finally having Darren change our of the pirate costume got six in-story years ago into another outfit. It has an all-new storyline which relied on some prior information but also introduces a bunch of worldbuilding. The book ends in a cliffhanger, so several major things are introduced and purposefully not resolved this time around. As the book ends Darren is implied to be heading immediately to deal with something made clear in the very last chapter. It’s a bit of a mood whiplash, but it’s actually a consequence of events in the very first book, so it’s simultaneously addressing something left open and setting up something new. It works well and I’m excited to move on to the next book. Darren is still the narrator, but he’s starting to sound older than in the earlier books. It would work okay to start here since it’s setting up a new phase of the series and is good about succinctly explaining any necessary backstory.

The plot is mostly Darren and Mr. Crepsley travelling to the Vampire Mountain, meeting up with some people on the way, and then Darren getting tours of the mountain. It’s laying a lot of worldbuilding detail in an interesting way, with a couple of pretty interesting fights in the process. It works well in the series but is definitely the kind of book that feel much more significant since I’ve read the series before. It’s not as viscerally horrific as the last couple, and while I find it utterly fascinating that’s partly because this is a re-read for me and this time around I know why a bunch of little things are significant.

I'm very excited to have picked up on some fantastic series-long planning that shows up this early, but it's very spoiler-y so I'll just say that if this one feels unremarkable but good on a first read, it's filled with some very cool stuff for later. At minimum this is when Darren gets to meet a lot of the major players whose alliances and allegiances will shape the rest of the series. 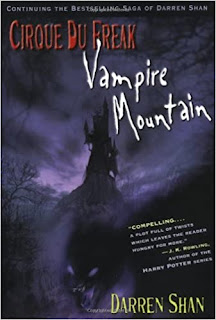