My Lord by L.B. Shimaira

Having lost her home and family in a raid, Meya flees east but is captured and abused by a slave trader before being sold to Lord Deminas, patron of the local lands. She’s forced to work as his chambermaid and discovers the Lord is as cruel as the rumours have made him out to be.

Yet, he’s rather protective of Meya and punishes anyone who dares hurt her. Even when he drinks her blood, he goes as far as to use his own to heal her wounds. Meya learns the castle holds many dark secrets; servants regularly vanish, including all the Lord’s previous chambermaids.

Meya and her paramour must ensure the same doesn’t happen to either of them, especially since it’s unclear if the Lord only desires Meya’s blood.

MY LORD follows Meya, a slave, drawn to her master, the Lord, but her every interaction with him pushes her to find new edges to her boundaries… and her kinks.

The characters (specifically but not only Meya and The Lord) are keenly aware of the massively skewed power dynamics in any interaction with The Lord, their master and owner. Consent around sex is emphasized, but it’s in a general framework of the impossibility of consent by a slave towards their master. I think it’s handled well overall, and the tension is used to heighten some scenes, but the characters keep making sure that there is explicit consent for sex acts. As far as anything non-sexual goes, however, the power imbalance comes back in full force in a way that fits the Lord as a character. Meya is also involved with another servant. I like their relationship and Nina is a good complement to her, as a partner and an accomplice in the castle.

There’s a recurring theme where characters are horrified at the possibility of being a “harlot” if their fortunes had gone a bit differently. It’s implied that, due to the ongoing war, anyone in such a position would have been forced into it and so it’s not a choice between sex work and other work, but rather between constant rape and employment by a lord who has hired them for other things (but could demand sex from them at any time). The setting isn’t modern and so it would feel out of place for the characters to even use terms like “sex work”, but it was a bit frustrating to read. Eventually they generally stop thinking of sex work as a negative thing, but not until that’s undeniably what they’re doing themselves.

I enjoyed this and I’m definitely interested in more stories with these characters.

From the Author: “The story you are about to read contains sexual abuse (rape is condemned), explicit sexual content (consent is emphasized), some kink play, violence, vampirism, and cannibalism. It deals with PTSD and features a queer, polyamorous relationship.” 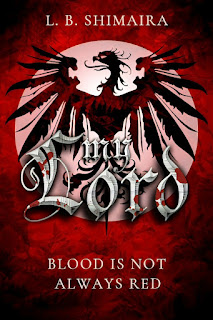