In the final installment of the Timekeeper trilogy (following Timekeeper and Chainbreaker), the crew of the Prometheus is intent on taking down the world’s clock towers so that time can run freely.

Now captives, Colton, Daphne, and the others have a stark choice: join the Prometheus’s cause or fight back in any small way they can and face the consequences. But Zavier, leader of the terrorists, has a bigger plan—to bring back the lost god of time.

As new threats emerge, loyalties must shift. No matter where the Prometheus goes—Prague, Austria, India—nowhere is safe, and every second ticks closer toward the eleventh hour. Walking the line between villainy and heroism, each will have to choose what's most important: saving those you love at the expense of the many, or making impossible sacrifices for the sake of a better world.

FIRESTARTER asks whether Danny and Colton will let the towers fall to save the flow of time, even if it means Colton disappears forever.

This is a satisfying ending to the trilogy, not so much raising the stakes as much as making clear the personal implications of actions with global consequences. The book begins with Colton and Danny at odds because of Danny’s actions at the end of CHAINBREAKER, and both of them with Daphne who is very quickly furious at Akash. There are a lot of characters, but only a few of them are important enough to track specifically. Zavier is an interesting character, I definitely appreciate him more this time (he also plays a much bigger role here). This book didn’t add much to the existing worldbuilding, except to give some more specifics about the history of the towers.

The last book basically ended on a cliffhanger, and this picks up right where it left off. There isn’t really a new storyline, which is fine since this is the end of a trilogy. It has something major which gets introduced, but it’s only implicitly resolved as part of the big finish. This wraps up a bunch of hanging plot threads, and handles the ending in a way that was very satisfactory for me. It’s only open-ended as much as life is, and the trajectory for the remaining characters is implied enough to give closure.

The narrators, Danny, Colton, and Daphne, are very different characters from each other, but the third-person narrative style meant that sometimes I didn’t know whose perspective it was for sure until a page or two into each chapter. It would not make sense for someone to start here without reading the first two books since it heavily relies on a lot of worldbuilding and main character development from before. It is pretty friendly towards returning readers who waited a while between books since the exposition sticks to the relevant portions and doesn’t attempt to recount the earlier books. Early on some of the tension between Colton and Danny stems from something at the very end of CHAINBREAKER, but there are enough tangles of loyalties happening that it’s easy enough to note that they’re currently not getting along and the. continue following the story from there.

The plot was a bit twisty, since part of the emotional arc revolves around betrayals and loyalty conflicts which were shown in the prior book’s finale. There’s also more factions than were obvious before, but by the midpoint I understood the players and what was happening. My early confusion was at least partly because of the long gap since reading the second books, but this was still a fast and engaging read. 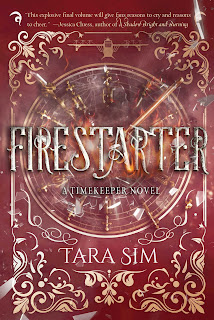