High Fantasy with a double-shot of self-reinvention

Worn out after decades of packing steel and raising hell, Viv the orc barbarian cashes out of the warrior’s life with one final score. A forgotten legend, a fabled artifact, and an unreasonable amount of hope lead her to the streets of Thune, where she plans to open the first coffee shop the city has ever seen.

However, her dreams of a fresh start pulling shots instead of swinging swords are hardly a sure bet. Old frenemies and Thune’s shady underbelly may just upset her plans. To finally build something that will last, Viv will need some new partners and a different kind of resolve.

A hot cup of fantasy slice-of-life with a dollop of romantic froth.

LEGENDS & LATTES pronounces itself high fantasy with low stakes, and it absolutely delivers. Viv has given up adventuring and now worries about things like building her coffee shop, attracting customers, explaining what coffee is, and other small intricacies of running a business in a new place, doing the everyday work that builds a cozy space for all who enter it peacefully. I love its take on a café cat.

As an orc, Viv deals with some conversational bumps as people tend to assume that the only thing she can be is the profession she’s left behind. Leaving adventuring as suddenly as she did left some hard feelings, and occasionally people from her former life show up whether she’s ready for them or not.

The worldbuilding assumes at least a passing familiarity with a D&D-style setting, and offers a lovely breath of fresh air which is something more exciting than the life of an NPC and less tumultuous than that of an adventurer… in the form of a former adventurer whose goal now is to build and run a coffee shop. It’s not a trouble-free endeavor, but the logistics are quieter and the problems are solved with tasty treats instead of violence. Sometimes Viv struggles with the temptation her sword offers, for some problems which arise have a more violent solution available to her.

The only thing stopping this from being the metaphorical embodiment of a fuzzy blanket, a requested hug, and curling up with my favorite beverage is a couple instances of ableist language, the kind of thing I routinely note and dock half a star for, but which don’t mar my overall enjoyment of the book.

It begins and ends with the fiddly and interesting process of designing a space for a purpose, full of details about floor plans, furniture, carpentry, and soothing conversations. Viv proceeds from step to step in a soothingly methodical manner, quietly surprised when she succeeds in building a calm and welcoming space, and even more surprised when she gets friends along the way. This is a delight to read and a breath of fresh air. 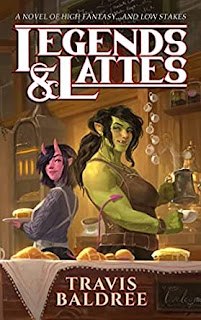