The trials: seventeen ways to die unless the luck of the vampire is with you. Darren Shan must pass five fearsome Trials to prove himself to the vampires clan - or face the stakes of the Hall of Death. But Vampire Mountain holds hidden threats. Sinister, potent forces are gathering in the darkness. In this nightmarish world of bloodshed and betrayal, death may be a blessing...

At the end of VAMPIRE MOUNTAIN, Darren was told he'd be in a series of trials which would determine whether he'd live or die. The trials are here and they're a torturous gauntlet which test him to the utmost.

This puts a strain on Darren's relationships with the vampires he knows and cares for. Some of them are helping him in the trials, some are judging his efforts, and all of them are complicit in a deeply ableist system which demands he fight for his life just because he was turned into a vampire too young. I'm surprised it doesn't strain his relationship with Mr. Crepsley more than it does, but I guess he needs him right now and is grateful for the help. Harkat Mulds continues to be an excellent character, even though he doesn't get a lot of time in this one, when he does show up it's as spectacular as it is ill-advised.

All the relevant plot backstory is tidily conveyed in the prologue, which was short and sweet. Additional info for specific characters is briefly put the first time each character appears, making it easy to remember who everyone is in case it’s been a while since reading the other books. The vampire society has some pretty ingrained ableism and sexism which Darren notices and comments negatively on. VAMPIRE MOUNTAIN stated an excuse for why there are almost no female vampires, so I’m hoping something happens with that as the series continues.

This is an pretty immediate  continuation of events in VAMPIRE MOUNTAIN, and it tell the story of Darren in the trials which were set up previously. It doesn’t really have a new storyline that didn’t exist before and it’s not trying to. It also ends on its own cliffhanger to be picked up in the next book, so it functions more like the middle section of a larger volume than as its own story. As the middle section of a larger story set at one location, it wouldn’t make sense to start here in terms of the emotional arc. Technically the backstory is explained well enough for it to be easy to follow the plot, but some of the emotional impact and tension would be lost. If you want to jump in mid-series, VAMPIRE MOUNTAIN is a much better entry point. I’m not sure if anything major is both introduced and resolved unless the individual trials count. Darren’s narrative voice sounds basically the same as in the last book, which makes sense since it’s been maybe a day between books, if even that long.

The plot revolves around the actual trials, with a break in the middle for the council meeting which was the whole purpose of their journey to the mountain in the first place. I like the narrative and the pacing, it's well-placed to be immediately after VAMPIRE MOUNTAIN. By fitting all the trials in one volume it leaves the next book open for the immediate aftermath of this book's ending. I'm excited for the next one, this ending was very tense! 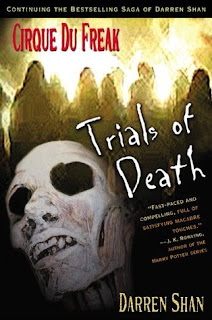