Night of the Mannequins by Stephen Graham Jones

We thought we'd play a fun prank on her, and now most of us are dead.

One last laugh for the summer as it winds down. One last prank just to scare a friend. Bringing a mannequin into a theater is just some harmless fun, right? Until it wakes up. Until it starts killing.

Luckily, Sawyer has a plan. He'll be a hero. He'll save everyone to the best of his ability. He'll do whatever he needs to so he can save the day. That's the thing about heroes--sometimes you have to become a monster first.

NIGHT OF THE MANNEQUINS is an absorbing thriller, expertly balanced and engrossing until the last moments.

Sawyer is a careful but unreliable narrator. He faithfully tells what happened, but his idea of what is literally happening versus what he's merely convinced is happening leaves a lot of very unsettling possibilities open. By the end I settled on an answer, but part of me still thinks the second option is viable. It shook me on a fundamental level and I’m still thinking about it days later. The story is told mostly linearly, and those small deviations from linearity start to add up as Sawyer gradually decides to tell backstory when it becomes necessary (but usually well after it’s first relevant).

It’s fantastic, I loved every minute! I can’t recommend it highly enough. 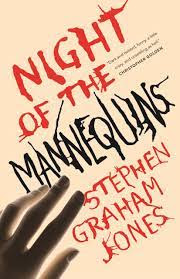