If you have not read anything about the Baudelaire orphans, then before you read even one more sentence, you should know this: Violet, Klaus, and Sunny are kindhearted and quick-witted, but their lives, I am sorry to say, are filled with bad luck and misery. All of the stories about these three children are unhappy and wretched, and this one may be the worst of them all. If you haven't got the stomach for a story that includes a hurricane, a signalling device, hungry leeches, cold cucumber soup, a horrible villain, and a doll named Pretty Penny, then this book will probably fill you with despair. I will continue to record these tragic tales, for that is what I do. You, however, should decide for yourself whether you can possibly endure this miserable story.

With all due respect,

The Baudelaire orphans are passed to yet another relative, this time to a woman who lives on a rickety clifftop house overlooking the lake where her husband drowned.

I like how well-developed the relationships between the siblings are. The books are short so there isn’t a lot of room for it, but most of the space available is used for interactions between them as they deal with whatever misfortune has happened next. Aunt Josephine is a pretty one-note but understandable character, she’s yet another adult who seems completely unable to help or fully understand what’s happening and why it’s bad.

There’s a sequence involving one of Olaf’s accomplices, the one where the children can’t tell if they’re a man or a woman. The whole scene is a mess of transphobia and fatphobia, with part of the terror derived from Violet not knowing what pronouns to use, and not knowing whether they should be addressed with “Sir” or “Ma’am”. Given that they are helping Olaf, the children’s inability to guess their gender should be irrelevant to their characterization as probably evil, but instead the whole thing is handled badly and it brought my enjoyment of the story to a screeching halt. It makes as much sense as justifying fright from not being able to determine someone’s hair color, and it’s just bad. It’s combined with fatphobia, using language like “monstrous” and “creature”, commenting on their size as an additional frightening characteristic. As their terror increases the text begins referring to the person as “it”, further dehumanizing them. They’ve never spoken, which also seems meant to be scary, and at minimum reinforces the dehumanizing characterization.

Other than just being the next step for the children, this doesn’t wrap up anything specifically left hanging from the last book. The storyline is new and has a major thing that’s introduced and resolved. It leaves a few things for later books to carry on. The narrator didn’t change and continues to ominously talk about his own life and the children’s fates. It could make sense to start here, but there’s important backstory about Count Olaf as a villain and the children’s situation until now which is best conveyed by the earlier books.

The plot is good, it has a great setup and execution. There’s a pretty cool mystery that the kids have to figure out, and it’s one where the reader genuinely can solve it along with them. Olaf’s latest scheme hits a great balance between horrific and absurd, which is tonally appropriate for the series. Mr. Poe is useless, as always, and Aunt Josephine is handled in a way that makes her flaws understandable even as they’re exaggerated to a ludicrous level to make the situation as bad as possible for the Baudelaire orphans. I found myself enjoying it a lot until the transphobic and fatphobic sequence happened. Unfortunately it was even worse than in the first two books, and so I can't recommend this one at all. 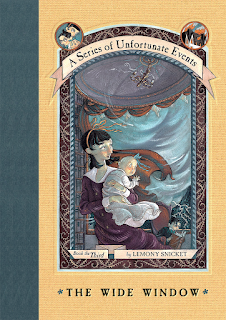