Darren Shan was just an ordinary schoolboy - until his visit to the Cirque Du Freak. Now, as he struggles with his new life as a Vampire's Assistant, he tries desperately to resist the one temptation that sickens him, the one thing that can keep him alive. But destiny is calling... the Wolf Man is waiting.

Darren, newly a half-vampire, is trying to preserve his humanity for as long as possible by refusing to drink human blood. Frustrated by his obstinance, Mr. Crepsley brings him to the Cirque du Freak so he can be around some people his own age. It ends badly for most people involved.

One thing I’m appreciating about the narration now that I’m an adult is the way that Darren telegraphs the general shape of events to come. Each book is narrated as something that already happened to him and which he’s survived, at least he’s persisted existentially in a way that lets him narrate in the future. With little comments about how they didn’t realize that something or someone would be such a big deal, or mentioning how badly something would turn out later, there’s an effect of hyping up anticipation about how the story will become more stressful. This serves a secondary purpose of letting the reader brace for the inevitable badness, which actually makes for a less stressful reader experience in some ways while still preserving the tension in the plot. By condensing the zone of anticipated stress to a focused area of the narrative, it lets readers who want a gentler experience know what plot areas are likely more safe. It does all this while winding up the tension in the area indicated, which makes a better overall experience (especially for people like me who rarely read horror). I read more horror now, but as a kid this author’s books were the only horror I reliably enjoyed reading.

Darren makes friends with Evra (a teenage performer) and Sam (one of the townspeople). They hang out and explore as a trio for much of the book. The other big relationship is the vampire/apprentice relationship between Mr. Crepsley and Darren, with much of that tension driven by Mr. Crepsley’s desire to keep Darren alive in spite of his refusal to drink the human blood his body needs. The worldbuilding is very character-focused, revolving around just a few people at the Cirque and some visitors to it. The most important new information is related to the Wolfman, Mr. Tiny, and The Little People.

This wraps up something left hanging from the last book. It has a new storyline which wasn’t found previously, with several major things that are introduced and resolved here. It doesn’t specifically leave anything for later, but it does end with a pretty major event which implies a lot of change for the next book to utilize. Darren is still the narrator, other than in the very beginning when a one-off minor character is followed by a third-person narrator. The plot is very self-contained and could actually make sense even to someone who hadn’t read the first one. I do recommend beginning at the beginning, of course, but this is especially friendly to readers who may have waited a while after reading the first book.

The ending sets reader expectations for the rest of the series in a way that is somewhere between establishing a minimum level of death and telegraphing the possibility that the series will continue to get bloodier and more brutal from here on out. As I discussed earlier, the way the ending is hinted at throughout the book promises the reader things are going to get bad well in advance of when they actually do. This definitely helps with the overall shape of the story and how the tension is wound. Darren’s main tension is in his refusal to drink human blood, fearing that doing so will change him in a way that be taken back. Mr. Crepsley is trying to get him to let go of this aversion since it’s literally killing him. Darren is trying to avoid the issue altogether by losing himself in hanging out with Sam and Evra, trying to be a normal kid for a while longer. Because this is horror, eventually things go terribly wrong and Darren is left with choices that are bleaker and simpler than what he had at the start. 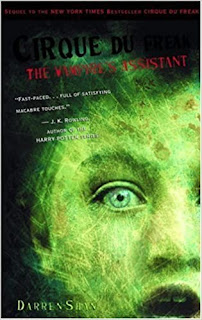