The Veiled Throne by Ken Liu (The Dandelion Dynasty #3)

Princess Théra, once known as Empress Üna of Dara, entrusted the throne to her younger brother in order to journey to Ukyu-Gondé to war with the Lyucu. She has crossed the fabled Wall of Storms with a fleet of advanced warships and ten thousand people. Beset by adversity, Théra and her most trusted companions attempt to overcome every challenge by doing the most interesting thing. But is not letting the past dictate the present always possible or even desirable?

In Dara, the Lyucu leadership as well as the surviving Dandelion Court bristle with rivalries as currents of power surge and ebb and perspectives spin and shift. Here, parents and children, teachers and students, Empress and Pékyu, all nurture the seeds of plans that will take years to bloom. Will tradition yield to new justifications for power?

Everywhere, the spirit of innovation dances like dandelion seeds on the wind, and the commoners, the forgotten, the ignored begin to engineer new solutions for a new age.

Ken Liu returns to the series that draws from a tradition of the great epics of our history from the Aeneid to the Romance on the Three Kingdoms and builds a new tale unsurpassed in its scope and ambition.

THE VEILED THRONE is a masterful continuation of The Dandelion Dynasty, centering on characters new and old as the next promised opening in the wall of storms approaches.

I enjoyed Zomi’s returning presence, and I’m understanding Jia more and more as this series continues. The worldbuilding once again is expanded through an interesting avenue: a cooking contest. Through this there’s even more new viewpoints, but funneled through just a couple of perspectives to help keep it manageable (and to maintain certain mysteries as not everyone’s past is relevant and open).

This picks up Princess Théra’s story where THE WALL OF STORMS left off, as well as introducing some new characters and focusing in on some previously present but minor ones. There’s at least one major thing both introduced and resolved here. It specifically leaves something for later since a lot of the politics involve moves the various factions are making in anticipation of the wall of storms opening in a few short years, but the book ends with that clock still running. Empress Jia and Princess Théra are returning narrators along with some new perspectives. Their ways of thinking are pretty easily distinguishable from each other, and I pretty easily kept track of what was going on. It could make sense to start here, it would be an enjoyable story with its own central conflict within a larger context. I don’t recommend using it as a starting point, but once again in this series it’s a pretty self-contained story featuring a mix of returning and new characters, with backstory for at least one character given from years before the main events. This means in some ways it’s a jumping-in point for a few important characters, which helps it be accessible both to new readers and to anyone who waited a while since reading the previous book.

There are various sub plots and side plots, as well as a bunch of details about Princess Théra’s life hiding out in a new land, but the heart of the plot revolves around a cooking contest to save a restaurant’s reputation, and it’s delightful. The author uses the discussions of cooking, the small-town intrigue, and the wit of the participants as a venue for discourse on so much more than that. The heroes solve problems with engineering and ingenuity, with the underlying belief that the universe is knowable. Just as Zomi’s discussions with her teacher in THE WALL OF STORMS allowed for a different view of Dara, the cooking contest brings together so many wonderful things (plus a few dastardly ones) to the betterment of almost everyone involved. It has taken up so much of my recollections that I’m aware there were some other plotlines which I appreciated while in the middle of reading, but once I reached the end I was left with the impression of the story of the contest, and the stress of the ending scenes in the archives. 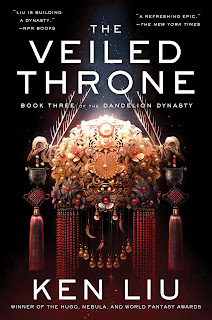