Nature is out of balance in the human kingdom. The sun hasn't shone in years, and crops are failing. Worse yet, strange and hostile creatures have begun to appear. And the people's survival hangs in the balance.

To solve the crisis, the oracle stones are cast, and Kaede and Taisin, two seventeen-year-old girls, are picked to go on a dangerous and unheard-of journey to Tanlili, the city of the Fairy Queen. Taisin is a sage, thrumming with magic, and Kaede is of the earth, without a speck of the otherworldly. And yet the two girls' destinies are drawn together during the mission. As members of their party succumb to unearthly attacks and fairy tricks, the two come to rely on each other and even begin to fall in love. But the Kingdom needs only one huntress to save it, and what it takes could tear Kaede and Taisin apart forever.

The exciting adventure prequel to Malinda Lo's highly acclaimed novel Ash is overflowing with lush Chinese influences and details inspired by the I Ching, and is filled with action and romance.

Stopping because I’m bored. Since it starts off with one of the two main characters having a vision about how she’ll fall in love with the other one, I immediately felt like any potential romance is pointless, since she wasn’t attracted before having the vision. There’s too little drama for it to be an exciting read, and too much trauma for it to be a soothing read, which hits an uncomfortable middle zone for me.

I adjusted to the mixed dual-POV style, so this isn’t part of why I stopped, but it definitely threw me at first to have the focus of the third-person omniscient view switch between the two main characters repeatedly within each chapter.

There’s lot of great worldbuilding happening, with some cool details about items, clothing, and architecture, but that ultimately wasn’t enough to hold my interest. 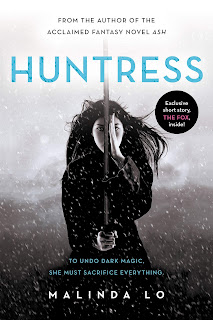