Darren, the vampire's assistant, gets a taste of the city when he leaves the Cirque Du Freak with Evra the snake-boy and Mr. Crepsley. When corpses are discovered--corpses drained of blood-- Darren and Evra are compelled to hunt down whatever foul creature is committing such horrendous acts. Meanwhile, beneath the streets, evil stalks Darren and Evra, and all clues point to Mr. Crepsley. Can they escape, or are they doomed to perish in the tunnels of blood?

Darren has started to accept his half-vampire status, but he doesn't trust Mr. Crepsley as far as he could throw him before he turned, and it might be a problem.

I find it fascinating (and true to the characters) that more than a year into Darren’s acquaintance with Mr. Crepsley he still fundamentally doesn’t trust him and is suspicious of him at the first sign that something bad has happened nearby. I’m more used to betrayal stories where the tension is in a main character slowly realizing that someone they’ve trusted is bad. Not here! I won’t spoil whether Darren is right to be suspicious, but he jumps straight to being ready to murder Mr. Crepsley when he and Evra find out about a bad thing that happened in the city. Evra has to talk him out of immediately taking drastic action without evidence. It’s totally consistent with Darren as a person, he’s principled and impulsive, so he has strong convictions but keeps acting on them without waiting to find out whether reality matches his suppositions.

This adds a new layer to the worldbuilding in the form of information about the Vampaneze, a great concept that I won’t spoil further. A lot of the language around one character involves discussing them as “mad” (used as a synonym for “crazy”). They’re specifically portrayed as having a different moral code from the main characters and Mr. Crepsley rigorously defends that they’re not “evil”. So that’s better, I guess? But it still was uncomfortable to have ableist language around mental health invoked in order to explain their motives. Darren calls them “mad because he doesn’t know how to understand why someone would believe and behave in that manner, which is a very common response.

This doesn’t specifically wrap anything from the last book in terms of plot, but it does address Darren’s lingering distrust of Mr. Crepsley and gives context to a topic very brief mentioned in THE VAMPIRE’S ASSISTANT. This is a new storyline, featuring a problem not specifically addressed before, with an inciting incident which occurs in the start of this book. Something major is introduced and resolved, and it leaves a pretty important thing for later. Darren’s narration is pretty consistent with prior books, though he’s starting to grow up, so there are ways that could change in the future without necessarily being a sign of narrative inconsistency. This could mostly make sense if someone started with this book and hadn’t read the previous ones, but it would make much more sense for someone who had read the prior books. It is pretty accessible for anyone who last read the first two books a while ago, as it doesn’t require more than a dim recollection of some earlier major events in order to be understandable.

Normally plots relying on betrayal and miscommunications stress me out, but this one resolves that particular tension with timing that meant I wasn’t too worried for the long term. I like the premise, it works well and is resolved in a manner suitable for horror: the answer is creepy and could go sour later but the immediate tensions have been addressed. 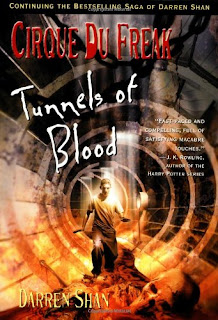