Pacific Rim meets The Handmaid’s Tale in this blend of Chinese history and mecha science fiction for YA readers.

The boys of Huaxia dream of pairing up with girls to pilot Chrysalises, giant transforming robots that can battle the mecha aliens that lurk beyond the Great Wall. It doesn’t matter that the girls often die from the mental strain.

When 18-year-old Zetian offers herself up as a concubine-pilot, it’s to assassinate the ace male pilot responsible for her sister’s death. But she gets her vengeance in a way nobody expected—she kills him through the psychic link between pilots and emerges from the cockpit unscathed. She is labeled an Iron Widow, a much-feared and much-silenced kind of female pilot who can sacrifice boys to power up Chrysalises instead.​

To tame her unnerving yet invaluable mental strength, she is paired up with Li Shimin, the strongest and most controversial male pilot in Huaxia​. But now that Zetian has had a taste of power, she will not cower so easily. She will miss no opportunity to leverage their combined might and infamy to survive attempt after attempt on her life, until she can figure out exactly why the pilot system works in its misogynist way—and stop more girls from being sacrificed.

If the synopsis above or the phrase "mech battles powered by polyamory to bring down a misogynistic death harem" intrigues you then you should go read this book as soon as you can. I love the whole thing, from the world to the plot to the characters, this is amazing on its own and I’m really excited for more. It's well-paced, brilliantly written, and just a damn good story.

The setting is vibrant, I love the main characters and the interplay between them. The slow burn between the three main characters is subtle but unmistakable, they have different dynamics between each pairing and it just fits so well. I appreciate that Zetian never loses her laser focus on what matters: burning this misogynist system down.

Zetian has bound feet and it matters to the narrative, affecting the way she moves through the world, literally, as well as being one more way that her society has oppressed her for her gender. Sometimes she walks, though according to her the last time "walk" was appropriate to describe her motion was right before her feet were broken and bound, the verb she uses is "totter". She's occasionally carried or in a wheelchair, but more often she has a cane. There's a consistent awareness of her mobility or lack of it and how that affects her daily existence. Piloting a mecha is the only time she's awake and not in pain from her feet, but it's also not positioned as a permanent solution. It's thematically appropriate, explored throughout the text in a nuanced way, and makes her one of very few protagonists I can think of who begin their story with a mobility issue but no plotline about a cure of any kind.

I loved this and I wish the sequel were available immediately. 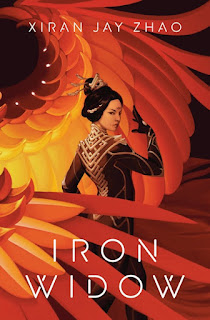