An aura of mean-minded resentfulness is thick in the streets of Ankh-Morpork. Insurrection is in the air. The Haves and Have-Nots are about to fall out all over again. The Have-Nots ant some of their own magic. But magic in the hands of amateurs is a dangerous thing.

The City Watch is the last line of defence against such unnatural goings-on. But when even the Watch have trouble telling Right from Wrong, you know that Law and Order ain't what it used to be. But that's all about to change.

GUARDS! GUARDS! is about the City Watch, the folks who come running when someone else is in danger, but lately they've mostly run into their ale cups. Then someone summons a dragon...

I like the guards, and the dragon lady. The stuff about the swamp dragons was great! The villains were fine but underdeveloped. They mostly existed to make the large dragon appear. The main villain had a lot more development and many complex thoughts about what he was doing and why/how, but since it's mostly him monologuing in his thoughts it felt flat in places.

I'm getting tired of this air where everyone but the main character knows what sex is and how it works. It's been in the other Discworld books I've read until this point, and in GUARDS! GUARDS! in particular the density of sly references to the idea of sex felt so high that it crosses over from "joke that older readers will get" to "joke that younger readers won't get but will probably notice that there's something they're not getting". The series isn't specifically aimed at kids, thought it would be fine for teen readers, so it's not inappropriate, really, just tiresome.

A good start to the City Watch sub-series, worth reading if you're trying to read a bunch of the series, but not spectacular on its own. It's clearly setting up something with Carrot to pay off in a later book, so it's important for that arc. 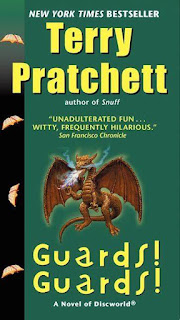