The Color of Magic by Terry Pratchett (Discworld #1, Wizards #1)

Terry Pratchett's profoundly irreverent, bestselling novels have garnered him a revered position in the halls of parody next to the likes of Mark Twain, Kurt Vonnegut, Douglas Adams, and Carl Hiaasen.

The Color of Magic is Terry Pratchett's maiden voyage through the now-legendary land of Discworld. This is where it all begins -- with the tourist Twoflower and his wizard guide, Rincewind.

This was just okay. The early parts dragged, in the end it was pretty good but not fantastic. A lot of language was quippy but it just felt off. It was smarmy, showing off how clever it is, but it didn’t have a ton to say beyond its own cleverness. It spent entirely too long hinting at a word or phrase that people weren’t quite understanding, and by the time the word was said in a way that made it discernible, I had spent long enough being annoyed at the running gag that I didn’t care that I got the answer. It’s the very first book published in the series, and it’s probably skippable. It does conclusively establish the pretty cool shape of the world that was explained at the very beginning, and is reiterated throughout the series, so there’s that at least. I like the dragon bits, but also I just like dragons.

I've read other books in the series so I know I like where they end up, but this definitely isn't up to that level since it's the first one.

Because all of the Discworld books can be read in any order, I wouldn’t worry too much about this one. 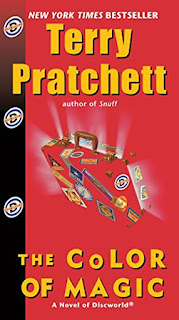