The Empire of Gold by S. A. Chakraborty (The Daevabad Trilogy, #3)

After a brutal conquest stripped the city of its magic, Nahid leader Banu Manizheh and her resurrected commander, Dara, must try to repair their fraying alliance and stabilize a fractious, warring people.

But the bloodletting and loss of his beloved Nahri have unleashed the worst demons of Dara’s dark past. To vanquish them, he must face some ugly truths about his history and put himself at the mercy of those he once considered enemies.

Having narrowly escaped their murderous families and Daevabad’s deadly politics, Nahri and Ali, now safe in Cairo, face difficult choices of their own. While Nahri finds peace in the old rhythms and familiar comforts of her human home, she is haunted by the knowledge that the loved ones she left behind and the people who considered her a savior are at the mercy of a new tyrant. Ali, too, cannot help but look back, and is determined to return to rescue his city and the family that remains. Seeking support in his mother’s homeland, he discovers that his connection to the marid goes far deeper than expected and threatens not only his relationship with Nahri, but his very faith.

As peace grows more elusive and old players return, Nahri, Ali, and Dara come to understand that in order to remake the world, they may need to fight those they once loved . . . and take a stand for those they once hurt.

THE EMPIRE OF GOLD is a satisfying conclusion to the amazing Daevabad Trilogy, taking its time tying up everything and everyone with suitable endings, as much as is possible for conflicts that brewed for millennia.

Dara's character arc is particularly good, but there's much to love for Nahri and Ali as well. The pacing is excellent, the characters’ motivations are coherent even as events become bloodier, and I’m very satisfied with the ending. It's everything I loved about the first two, but with more catharsis and resolution since it's the final book in the trilogy. The longer page count let the story take how long it needed, with space for things to play out at a wonderful pace.

This wraps up a bunch of stuff left hanging from the previous book. There's a storyline that has most of its major elements here though it wasn't entirely new for this book. This is definitely a distinct phase of the larger story, with enough that's unique to it for it to stand out, but more than enough in common to be a great finale. The big things I can think of that get resolved here are working off of ground laid before, so nothing is wholly new but the way things are developed and complicated makes it feel fresh. As the last book, things are wrapped up very well. The characters get endings that are right for them and I like how things work out for Daevabad as a whole. A few things are left open, but it's the openness of possibility for the characters who made it to the end of the book. The main characters are the same and their narrative voices have stayed consistent, with some changes in how they think about certain events. This wouldn't make sense if someone started here and hadn't read the first books. There's enough story here that if someone persisted after the first few chapters they might have a good time, but a lot of what makes this so good is dependent on knowing what the characters and their city have been through, without that knowledge the resolutions wouldn't be as meaningful. If you're intrigued by book three, please go back to the beginning and read the whole trilogy.

I loved this and I'm sad there isn't more, but there's plenty to linger over. 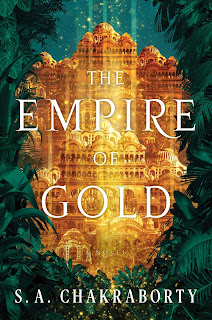