No, I didn’t kill the dead human. If I had, I wouldn’t dump the body in the station mall.

When Murderbot discovers a dead body on Preservation Station, it knows it is going to have to assist station security to determine who the body is (was), how they were killed (that should be relatively straightforward, at least), and why (because apparently that matters to a lot of people—who knew?)

Yes, the unthinkable is about to happen: Murderbot must voluntarily speak to humans!

FUGITIVE TELEMETRY finds Murderbot as murder-detective, trying to figure out why a dead human is dead on Preservation Station, all while following a bunch of human rules.

I like procedurals and this is one, of a sort. It certainly fits the "gruff detective who isn't with the investigating body but still has to begrudgingly work with them and sometimes is under suspicion" classic set of tropes... except it's Murderbot on a station trying to solve the murder. If you like Murderbot and solving mysteries, you'll love this, I sure did.

This continues, generally speaking, the relationships and definitely-not-friendships that have been developing throughout the series so far. The main storyline starts here and wasn't present previously, and, as a murder mystery, there's absolutely a major thing that's introduced and resolved in this volume. I doubt it'll be the last book in the series, and it has things that the last book left open but this doesn't close off, so at minimum those could get picked up by later books. Plus, generally speaking, I'm up to read about whatever Murderbot decides to wander around and do. The MC is still Murderbot and its voice is consistent, though its thoughts are slowly changing in how it thinks about specific humans and groups of humans. This would mostly make sense if someone picked it up at random and didn't know about the rest of the series. The necessary context is present and the main plot is contained in this volume.

This has murder, bots, and Murderbot, I'm happy and ready for the next book! 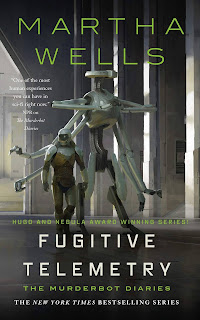