The Collapsing Empire by John Scalzi (The Interdependency, #1)

The first novel of a new space-opera sequence set in an all-new universe by the Hugo Award-winning, New York Times-bestselling author of Redshirts and Old Man's War.

Our universe is ruled by physics and faster than light travel is not possible -- until the discovery of The Flow, an extra-dimensional field we can access at certain points in space-time that transport us to other worlds, around other stars.

Humanity flows away from Earth, into space, and in time forgets our home world and creates a new empire, the Interdependency, whose ethos requires that no one human outpost can survive without the others. It’s a hedge against interstellar war -- and a system of control for the rulers of the empire.

The Flow is eternal -- but it is not static. Just as a river changes course, The Flow changes as well, cutting off worlds from the rest of humanity. When it’s discovered that The Flow is moving, possibly cutting off all human worlds from faster than light travel forever, three individuals -- a scientist, a starship captain and the Empress of the Interdependency -- are in a race against time to discover what, if anything, can be salvaged from an interstellar empire on the brink of collapse.

THE COLLAPSING EMPIRE is a quippy sci-fi epic about the end of an era and the pivot from archaic relevance to necessity as the interstellar Flow between planets collapses.

All the characters were quippy and witty in this way that started to make them all feel the same. The overall effect was to make it so Cardenia was the only one who actually stood out, but that’s mostly because she’s new to her position, out of her depth, and knows it. Everyone had schemes and machinations that they were totally sure would definitely work out well for them. Sometimes they did, sometimes they didn’t, but their smug self-confidence was frustrating when it was coming from every character at once. I will admit that there a few characters who are so insufferable that I might enjoy watching their downfall in later books, but I’ll be totally fine if I don’t read any more of this series.

The Emperox's family and various places have Chinese names and, as far as I can tell as a non-Chinese person, that's the extent of it. They could have been completely made-up sci-fi names and it would have the same effect on the plot and characters. I mention it because there's a trend of borrowing Asian aesthetics in sci-fi and elsewhere without actually having it matter to the story, and this seems to be yet another in that vein. It actually made it harder for me to track what was going on because every time they said something was happening in Xi'an I had to remember they meant a place not on Earth.

There's one queer character, I'll get to her in a minute. There are, however, several characters commenting on how being interested in a same-sex relationship would be totally fine... it's just not them. This is most memorable with the Emperox, who is being pressured into marriage with a guy but the political stuff could be equally satisfied if she married his sister... alas she's not gay and she doesn't like the guy so she has to figure out another solution. That she doesn't like the sister either is true but not nearly as relevant in the framing.

It felt abrupt in several places, using surprising content (whether sexual or violent) for shock value. There’s a character who is everything I typically dislike about a classic male captain who is self-important and uses sex to control his crew and manipulate power dynamics… except she’s a woman. It turns out I dislike this kind of character no matter what their gender and I found her to be off-putting. She wields sex in a way that likely isn’t technically rape, and isn’t presented as rape in the text, but also doesn’t feel like the other parties are enthusiastically consenting. "Likely isn't technically rape" is not a sentence I like as an accurate description of a scene, since it indicates that the text has allowed to be ambiguous something that shouldn't be since sex and sexual assault clearly aren't intended to be main themes. It wasn’t graphic, but it was consistent, feeling like for every X pages of conversation she had to fuck someone. I appreciate the sex-positive atmosphere, but it cemented her in my brain as “captain who fucks”, and made her less interesting overall. It didn’t help at all that her introduction is mid-fuck with a subordinate who has basically no dialogue and may as well have been a sex toy for all they added to the scene, as all the conversation was between the captain and someone who entered the room to speak with her. I don’t mean “subordinate” in a sub/dom sense, I mean that she is fucking a crew member over whom she has a whole lot of power as the captain. She's also one of two queer characters, since later in the book she's confined and fucks the woman guarding her. "Asshole captain who fucks regardless of gender" certainly is queer rep, and in a context where she's just one of many queer characters that could feel more okay, but instead it feels like she's fitting the biphobic stereotype where liking more than one gender is equated with extreme promiscuity.

There's a reveal that could have been really cool if the same information had been presented in a different order. Someone has a theory that's (so far) correct, and someone else is incorrect. By the time we learn what the incorrect person thinks they're already established as an odious person and there's no emotional weight to finding out they were wrong. It explains their earlier actions, but otherwise is strange and feels pointless. I think it would have been more interesting to have them presented earlier as competing theories and have it unknown who was right until much later. Instead they're just wrong, and uninteresting in the process. 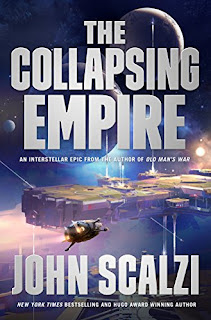