Wyatt would give anything to forget where he came from--but a kingdom demands its king.

In Asalin, fae rule and witches like Wyatt Croft...don't. Wyatt's betrothal to his best friend, fae prince Emyr North, was supposed to change that. But when Wyatt lost control of his magic one devastating night, he fled to the human world.

Now a coldly distant Emyr has hunted him down. Despite transgender Wyatt's newfound identity and troubling past, Emyr has no intention of dissolving their engagement. In fact, he claims they must marry now or risk losing the throne. Jaded, Wyatt strikes a deal with the enemy, hoping to escape Asalin forever. But as he gets to know Emyr, Wyatt realizes the boy he once loved may still exist. And as the witches face worsening conditions, he must decide once and for all what's more important--his people or his freedom.

I loved the first part of the book and I truly love the writing, I just can't read about other people's dysphoria right now.

CWs from author: violence, child abuse, childhood sexual harassment and assault, allusions to pedophilia, suicidal ideation and mentions of suicide, misgendering, drug use, and mentions of infertility and miscarriage. 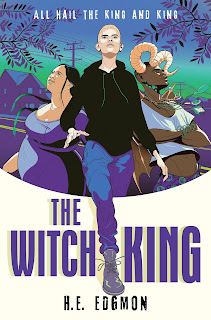