The Ruin of Kings by Jenn Lyons (A Chorus of Dragons, #1)

Kihrin is a bastard orphan who grew up on storybook tales of long-lost princes and grand quests. When he is claimed against his will as the long-lost son of a treasonous prince, Kihrin finds that being a long-lost prince isn't what the storybooks promised.

Far from living the dream, Kihrin finds himself practically a prisoner, at the mercy of his new family's power plays and ambitions. He also discovers that the storybooks have lied about a lot of other things things, too: dragons, demons, gods, prophecies, true love, and how the hero always wins.

Then again, maybe he’s not the hero, for Kihrin isn’t destined to save the empire.

Queer Rep Summary: Not far enough to assess, the book is shelved as LQBTQ+.

I was having trouble following the story across points in time, as the narrators didn't feel different enough to be distinctive. The perspectives are labeled at the start of each chapter, but I felt adrift, bored, and uninterested. I did not like whatever character is writing the footnotes, I know the point is that the main narrator had different information from whoever is providing the commentary, but it felt like I was being jerked around since the main narrator would say one piece of information then the footnote narrator would immediately contradict them with yet more worldbuilding I didn't yet have the context to care about. 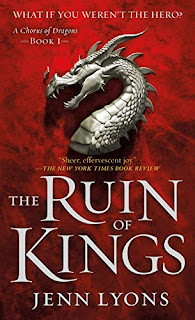