For The Wolf by Hannah Whitten (The Wilderwood, #1)

For fans of Uprooted and The Bear and the Nightingale comes a dark, sweeping debut fantasy novel about a young woman who must be sacrificed to the legendary Wolf of the Wood to save her kingdom. But not all legends are true, and the Wolf isn’t the only danger lurking in the Wilderwood.

As the only Second Daughter born in centuries, Red has one purpose-to be sacrificed to the Wolf in the Wood in the hope he’ll return the world’s captured gods.

Red is almost relieved to go. Plagued by a dangerous power she can’t control, at least she knows that in the Wilderwood, she can’t hurt those she loves. Again.

But the legends lie. The Wolf is a man, not a monster. Her magic is a calling, not a curse. And if she doesn’t learn how to use it, the monsters the gods have become will swallow the Wilderwood-and her world-whole.

FOR THE WOLF is a slow burn fantasy story full of magic and longing, built on wound care and vibing. Probably not a retelling in traditional sense, it has the bones of Beauty and the Beast, the flesh and sinew of something all its own, twisted and bloody but still whole.

The plot is there, technically, but most of the action is them running around bleeding or not bleeding or asking the other one to bleed or not bleed on something so it can do or not do a magic thing. Also there's only one bed, and some gestures at a love triangle that resolves itself with very little fanfare. If you don't like wound care and longing then read something else, as that's (gloriously, intimately) the bulk of the text. There's a larger arc involving Red's twin sister which is set to continue in the next book, and it has a lot of promise. I like this one, it hits a niche I didn't realize I was missing. 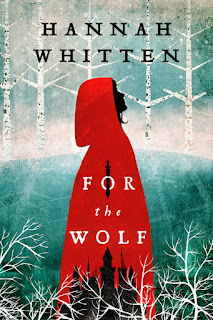