In 1915, The Birth of a Nation cast a spell across America, swelling the Klan's ranks and drinking deep from the darkest thoughts of white folk. All across the nation they ride, spreading fear and violence among the vulnerable. They plan to bring Hell to Earth. But even Ku Kluxes can die.

Standing in their way is Maryse Boudreaux and her fellow resistance fighters, a foul-mouthed sharpshooter and a Harlem Hellfighter. Armed with blade, bullet, and bomb, they hunt their hunters and send the Klan's demons straight to Hell. But something awful's brewing in Macon, and the war on Hell is about to heat up.

Can Maryse stop the Klan before it ends the world?

RING SHOUT is a tense and adventurous novella set in 1915 with the Klan as monstrous racists and Ku Kluxes as interdimensional monsters spreading like a disease among them, fought by a close-knit Black resistance.

This adds a supernatural angle to real events in a way that heightens the stakes but doesn't excuse the actual historical violence. The Ku Kluxes are there because of the racism and hatred which the Klan already has, and this works so well in the narrative. Maryse is a fantastic protagonist, the resistance are a great group, and I especially enjoyed Dr. Bisset.

I wasn't expecting aftercare in a story this short but this wraps up things really well in terms of the emotional arc, with a satisfying resolution on other fronts. There's tiny moment that makes me think this could support a sequel in the same world, so if that materializes I'm very interested. 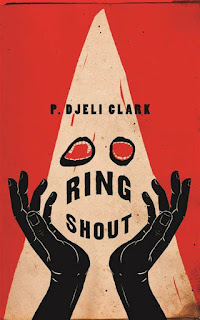