Death comes to us all. When he came to Mort, he offered him a job.

After being assured that being dead was not compulsory, Mort accepted. However, he soon found that romantic longings did not mix easily with the responsibilities of being Death's apprentice...

Most of this was fun and I had a good time, but there were too many random moments that took me out of the narrative with an off-putting comment that didn’t fit the rest of the story. Usually this took the place of treating the mention of someone’s fatness or the idea that they might be insane as if the observation of it was the whole joke. These moments were especially frustrating because so much of the rest of the humor is great. It’s paced well, the dynamic between DEATH and Mort was strange but interesting, and I liked the ending. 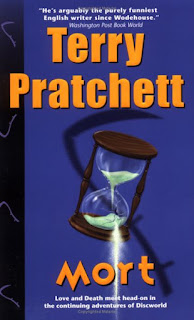