All Systems Red by Martha Wells (The Murderbot Diaries, #1)

In a corporate-dominated spacefaring future, planetary missions must be approved and supplied by the Company. Exploratory teams are accompanied by Company-supplied security androids, for their own safety.

But in a society where contracts are awarded to the lowest bidder, safety isn’t a primary concern.

On a distant planet, a team of scientists are conducting surface tests, shadowed by their Company-supplied ‘droid — a self-aware SecUnit that has hacked its own governor module, and refers to itself (though never out loud) as “Murderbot.” Scornful of humans, all it really wants is to be left alone long enough to figure out who it is.

But when a neighboring mission goes dark, it's up to the scientists and their Murderbot to get to the truth.

*I received a free copy as part of the 2021 Hugo voters packet.

ALL SYSTEMS RED is about a loner in a crowd, a Murderbot who just wants to be left alone to watch its serials. Unfortunately, someone is trying to kill the scientists it's there to protect.

I love this book, I love Murderbot. The setting is great, the background is told as its relevant to the story and mostly consists of slowly reinforcing how much the company will do whatever it has to to protect its money, and that simple calculus drives a lot (but not quite all) of the difficulties that the group faces. The scientists come through as individuals even though Murderbot is doing its best to ignore them. The narration is a delightful mix of Murderbot saying what literally happened and adding its own asides with the info that informed its decisions or give context to the events. Since the format is that this is a log of some kind (the series is The Murderbot "Diaries" after all), the style works really well to imply the bigger world but treat the reader like someone who is generally familiar with it and just needs to know what happened here. I love being thrown into a book in this manner and had a great time.

I'm very excited to read the rest of the series, I need to know what happens next to Murderbot. 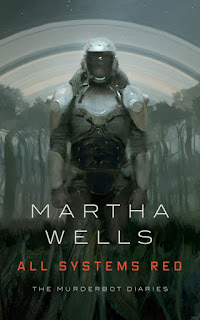