The City of Brass by S.A. Chakraborty (The Daevabad Trilogy, #1)

Nahri has never believed in magic. Certainly, she has power; on the streets of 18th century Cairo, she’s a con woman of unsurpassed talent. But she knows better than anyone that the trade she uses to get by—palm readings, zars, healings—are all tricks, sleights of hand, learned skills; a means to the delightful end of swindling Ottoman nobles.

But when Nahri accidentally summons an equally sly, darkly mysterious djinn warrior to her side during one of her cons, she’s forced to accept that the magical world she thought only existed in childhood stories is real. For the warrior tells her a new tale: across hot, windswept sands teeming with creatures of fire, and rivers where the mythical marid sleep; past ruins of once-magnificent human metropolises, and mountains where the circling hawks are not what they seem, lies Daevabad, the legendary city of brass, a city to which Nahri is irrevocably bound.

In that city, behind gilded brass walls laced with enchantments, behind the six gates of the six djinn tribes, old resentments are simmering. And when Nahri decides to enter this world, she learns that true power is fierce and brutal. That magic cannot shield her from the dangerous web of court politics. That even the cleverest of schemes can have deadly consequences.

After all, there is a reason they say be careful what you wish for...

THE CITY OF BRASS is a fantasy balanced on a knife's edge, with a prince and a con artist working at occasionally-aligning purposes in a city filled with djinn and Daeva, with the partially human underclass just trying to survive.

This generally avoids infodumps by making sure that, when exposition is necessary, it comes in the form of telling someone information that’s truly new to them. Sometimes that’s a briefing for an unfamiliar situation, other times it’s a story around the fire. A lot of these explanations happen early on, and it seemed like a bit much at first (there are a lot of tribes, for one), but the main narrative only demands consistent recognition of three or four tribal names so it wasn't overwhelming once the story got going. The two main characters have very different lives and knowledge bases, and that works together to give the reader a fuller picture of the world and the secondary characters.

I love the political wrangling and intrigue. Ali is pretty blunt, surrounded by much more subtle players with complicated aims, and there are a few places where people use insider terms to tell him what’s going on but he doesn’t realize that a double meaning is involved. Later when Mahri becomes immersed in it she's a much savvier player with the information she does have, and I'm looking forward to how she handles things as the the trilogy progresses. I love heists and thieves, so having Mahri the con artist as a protagonist is a treat. She's self confident but wary of the situation, and that blend of prowess and uncertainty is truly delightful. There's something great about taking a person highly skilled in one arena and dropping them into a wholly different one that brings out their known and unknown strengths in intriguing ways. Dara isn't a point of view character, and I think that's because he knows too much to be a good narrator. The story is so much richer for his presence, but he's stingy with information, doling it out only when he thinks Mara needs to know something, which is often well after he's acted on the knowledge. This leaves her to pick up the pieces each time, in turns fond of and exasperated by him as he drifts in and out of the scene.

The ending is rather shocking, managing grief and triumph as Mahri and Ali have to deal with sudden changes in the last chapters. It's not a twist of plot as much of the inevitability of consequence, as things that had been a little bit wrong for a while suddenly get out of control. I'm excited for the next one, I need to know what happens now. 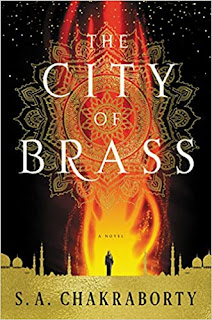