Every world has its rules--even a flat one carried by four elephants riding on a giant turtle. That's why a dying wizard is searching for an eighth son of an eighth son to bestow his wizardly powers upon before meeting Death in six minutes. Unfortunately it is quickly discovered--though not quite quickly enough--that the newborn babe the wizard anoints just before bidding the Discworld adieu is, in reality, a girl What's done cannot be undone--despite old Granny Weatherwax's attempts to bring the child into the witchy fold--and little Esk is now a wizard, through and through. And she's destined to bring chaos and confusion to the all-male faculty of Ankh-Morpork's Unseen University . . . who are already fairly addled to begin with.

EQUAL RITES is the origin story of Discworld’s first female wizard, and her journey to grudging acceptance in magical society.

The narrative style is wry and witty, the unnamed narrator assuming that the reader is from our world and not Discworld, which provides space for funny comparisons, metaphors, and other observations. The narrator knows more than the characters in an absolute sense, but consistently uses that knowledge to provide humor and context.

Most of the characters start out with some sexist assumptions about how things ought to work, and the point of the story is them realizing the shape of those assumptions and questioning their validity in the face of a child whose existence refutes them absolutely. The cadence of the physical journey and the mental transformation blends together into a well-paced story. I liked it and I’m looking forward to later developments in this slice of Discworld.

I must briefly review a few caveats, however. This stands out as a book with several canonically fat characters but it does not equally mention when characters are thin, leaving the impression that fatness is strange and noteworthy. There’s also a comment about weight loss that technically fit with the moment but was uncomfortable to read and really unnecessary. The other thing is there’s a character with an obvious stutter who is portrayed as being grateful for other people interrupting to guess his next word for him, and then the stutter is magically cured at the end of the book. There are several scenes of him being interrupted while speaking, making it a running gag that ends abruptly once he’s cured. When compared with the subtle portrayals of characters gradually confronting and untangling their sexist prejudices, the handling of the stuttering character stands out as likely being ableist rather than being a fictional portrayal of ableism. 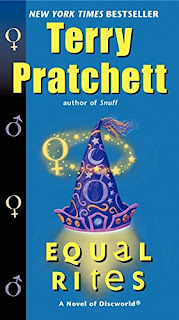