It has a dark past – one in which a number of humans were killed. A past that caused it to christen itself “Murderbot”. But it has only vague memories of the massacre that spawned that title, and it wants to know more.

Teaming up with a Research Transport vessel named ART (you don’t want to know what the “A” stands for), Murderbot heads to the mining facility where it went rogue.

What it discovers will forever change the way it thinks…

I like the dynamic between Murderbot and ART, the main plot is good and the humans are interesting. The worldbuilding expands well on the first book, I like how finally learning the company's name doesn't change anything for Murderbot because the role is more important than the particular signifier. It's a great sequel with interesting characters, because they're all novellas the series feels very episodic, which created this dynamic where ARTIFICIAL CONDITION has to communicate exactly how much backstory this particular entry needs and there's isn't much room for fluff.

This doesn't specifically wrap up anything left hanging from ALL SYSTEMS RED, it's more of a continuation that usually feels like it could have been section two of one large book. It works really well and I like this story on its own. The main thing it wraps up is the question of what happens next for the character, and the answer is this whole story and any additional sequels. The main storyline starts here and wasn't present before, with several major things introduced and resolved in this volume. The thing it leaves for future volumes is, again, what does this character do next? There is an overarching plot involving the search for answers about its past, and my best guess is that the next step is to find out who's responsible for what happened, but I don't know for sure. The main character is the same as the first book. This might actually make sense even if someone hasn't read the first one. There are obviously be some events from the first book that get referenced but never really explained (since they just happened a day or two ago from the main character's perspective), and those might seem odd to someone who picked up ARTIFICIAL CONDITION without knowing it was a series, but I think it communicates the stakes and the setting pretty succinctly in a way that would make this make sense even in that scenario.

One thing that was uncomfortable to read was the disdain that Murderbot has for sexbots, it could be part of its character arc, especially given it behaved after a particular interaction, but it was frustrating to feel like the very human prejudice against sex workers was replicated again in a protagonist who keeps insisting it isn't human. I understand that's probably the entire point, I'll just be keeping an eye on it as the series continues because right now I can't tell if its examining a prejudice or replicating it.

I'm liking the series so far and I'll definitely continue to the next one. 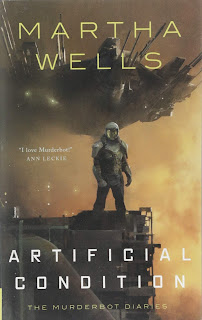