Persephone Station, a seemingly backwater planet that has largely been ignored by the United Republic of Worlds becomes the focus for the Serrao-Orlov Corporation as the planet has a few secrets the corporation tenaciously wants to exploit.

Rosie--owner of Monk's Bar, in the corporate town of West Brynner, caters to wannabe criminals and rich Earther tourists, of a sort, at the front bar. However, exactly two types of people drank at Monk's back bar: members of a rather exclusive criminal class and those who sought to employ them.

Angel--ex-marine and head of a semi-organized band of beneficent criminals, wayward assassins, and washed up mercenaries with a penchant for doing the honorable thing is asked to perform a job for Rosie. What this job reveals will effect Persephone and put Angel and her squad up against an army. Despite the odds, they are rearing for a fight with the Serrao-Orlov Corporation. For Angel, she knows that once honor is lost, there is no regaining it. That doesn't mean she can't damned well try.

This kept infodumping, telling me how I should feel about something in a kind of irksome way. I don’t mind infodumps of information, but the barrage of info and how I should process felt like I wasn’t being trusted to figure anything out. There was a particular scene right before I stopped reading where a character narrates this whole initial meeting, change of heart, and now strong ties between herself and a person she’s telling us about who’s asleep in the next room. It’s the kind of backstory that either needs its own novella or just two sentences to say where they are now, because the choice to do this in-between thing felt like I was being told about some other story I could have been reading instead. I constantly felt like I had both too much and not enough information about what was happening, and I decided to stop. 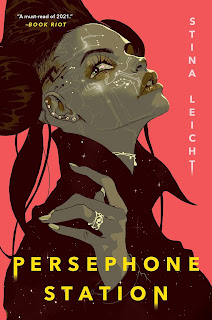