The fourth and final part of the Murderbot Diaries series that began with All Systems Red.

Murderbot wasn’t programmed to care. So, its decision to help the only human who ever showed it respect must be a system glitch, right?

Having traveled the width of the galaxy to unearth details of its own murderous transgressions, as well as those of the GrayCris Corporation, Murderbot is heading home to help Dr. Mensah—its former owner (protector? friend?)—submit evidence that could prevent GrayCris from destroying more colonists in its never-ending quest for profit.

But who’s going to believe a SecUnit gone rogue?

And what will become of it when it’s caught?

EXIT STRATEGY, the (supposed) series finale so good that it got sequels. Murderbot finds out that its actions have caused trouble for the humans that made its quest possible in the first place, and heads back to help them.

I love Murderbot, its rapport with the various humans is complex and interesting, it was nice to see Dr. Mensah again. The narration is great, the world-building continues to build incrementally in a way that gives everything you need to know for this volume (and no more), but the whole picture is one of a complex economy of corporations, planets, and political entities.

The combination of planning for action and then carrying it out has been well-handled and exciting all series, but it really shines here. Murderbot explains its plans, then how it has to adjust, whether it goes this idea from a serial, how things go wrong, how its trying to fix it. I love the detail, it's at just the right level because it says the shape of what it's accomplishing (or attempting) but doesn't get overly technical. It makes it feel like a lived-in world, where Murderbot knows exactly what its doing and how to accomplish it with its tools, but doesn't bog down the narration with jargon. Something about the way that this character who canonically loves fiction comments when it got the idea for its current plan from its favorite show... it's really relatable and I love it.

It looks like this was intended (or at least marketed) as the final book in the series. You may note that there are more than four books, so that didn't stick. It wraps up a lot of things left hanging from earlier in the series, most notably by returning to the humans from ALL SYSTEMS RED. The main storyline (help the humans with their immediate problem) is pretty self-contained, but the reasons for Murderbot to care about these particular humans enough to seek them out and help them was set up in the previous books. The immediate threat is resolved here, but it really was introduced earlier in the series, so this very much is trying to be the conclusion of (this stage of) the saga, rather than its own thing. When evaluated based on it being intended as the final book, it wraps up a lot of stuff, all the way back to the first book, and it does feel mostly finished. However, it does leave things that could be addressed later, like, what is Murderbot going to do with the rest of its existence? This would have been a fine place to stop, narratively, but I'm glad this isn't the last I'll read of Murderbot. The main character is the same and its voice is pretty consistent, there have been incremental changes in how it things about certain things (mostly how it thinks of humans and of itself in relation to them), but the changes aren't huge enough for it to feel like a different character altogether. If someone started here without reading the rest of the series I don't think it would go well. This was meant to be the series finale and the emotional crux of it is the question about how Murderbot will relate to the humans from ALL SYSTEMS RED and what its place is with them. The action bits are a rescue, and that would make sense, but a lot of the catharsis would be missing if someone hadn't read the other books.

Since this isn't actually the last book I'm going to read more Murderbot. This series is really great so far and I hope that continues. 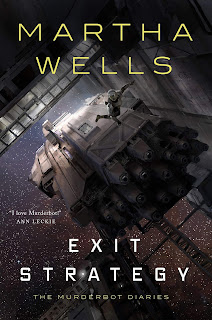