She swallowed a star, and the Sisterhood called her the Eater.

Elfreda Raughn will avoid pregnancy if it kills her, and one way or another, it will kill her. Though she’s able to stomach the gruesome day-to-day duties, the reality of preserving the Order’s magical bloodline horrifies her, but the Sisters of Aytrium have sworn to pay a price for the safety of their nation.

Elfreda wants out, whatever the cost.

So when a shadowy cabal approaches her with an offer of escape, she leaps at the opportunity. As their spy, she gains access to the highest reaches of the Order, and enters a glittering world of opulent parties, subtle deceptions, and unexpected bloodshed.

A phantasmagorical indictment of hereditary power, Star Eater takes readers deep into a perilous and uncanny world where even the most powerful women are forced to choose what sacrifices they will make, so that they might have any choice at all.

This was recommended to me based on being about cannibal nuns, but I didn't realize how much pregnancy and dread of pregnancy would feature in it. Those themes are very triggering for me and I had to stop. 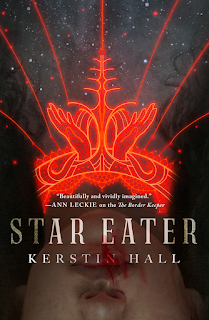