The Song of Achilles by Madeline Miller

Greece in the age of heroes. Patroclus, an awkward young prince, has been exiled to the court of King Peleus and his perfect son Achilles. Despite their differences, Achilles befriends the shamed prince, and as they grow into young men skilled in the arts of war and medicine, their bond blossoms into something deeper - despite the displeasure of Achilles's mother Thetis, a cruel sea goddess. But when word comes that Helen of Sparta has been kidnapped, Achilles must go to war in distant Troy and fulfill his destiny. Torn between love and fear for his friend, Patroclus goes with him, little knowing that the years that follow will test everything they hold dear.

THE SONG OF ACHILLES is the story of Achilles’s boyhood and (most of) the Trojan War, as told by his lover, Patroclus, through the warm glow of his adoration and desire.

I like how it handles the very high number of sexual assaults and consent violations which are, in many ways, the backbone of Greek mythology (or at least the family trees). Just giving proper context to this story and to events in Patroclus' and Achilles' lives requires some discussion of these themes, and I think it did as well as it could without feeling very anachronistic. This is a beautiful retelling of a tragic story, it makes me wish that Achilles, Patroclus, and Breisis could have been happy together, but it wasn't meant to be.

This retelling takes the stance that Achilles was definitely gay, with zero interest in women, and it seems to heavily imply that maybe Patroclus could have been happy with a woman but he has eyes only for Achilles. That does however lead to some interesting story decisions which have to be resolved, given the source material. It keeps one very notable instance of Achilles sleeping with a woman, and artfully dodges another that would be assumed to have happened but technically could be worked around. It did give it a kind of biphobic air to this retelling, like it's working so hard to show the love and devotion between Achilles and Patroclus that it shoves away any hint of intimacy or connection with women on Achilles' part. I'm not a Classics scholar and I don't know if the rejection is part of the myth, it just felt kind of bad in a few places because of it. It ends up working as part of Achilles' slow transformation from a kid who didn't want to hurt anyone into a stubborn asshole who let a lot of people die for his pride, but it did make me dislike him by the end. Patroclus' has a consistently rosy view of Achilles and mourns this change rather than rejecting him for it, which definitely helped me keep caring about the story even as I liked Achilles himself less and less.

I liked it overall and I'm glad I read it, anything that manages to make Achilles feel like slightly less of an asshole than most portrayals of him is doing a great job, and this manages that without stripping away the abrasive parts of his character. 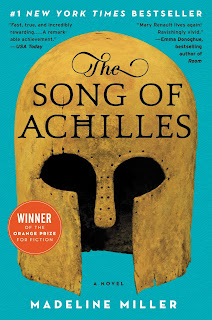