The Twisted Ones by T. Kingfisher

When a young woman clears out her deceased grandmother’s home in rural North Carolina, she finds long-hidden secrets about a strange colony of beings in the woods.

When Mouse’s dad asks her to clean out her dead grandmother's house, she says yes. After all, how bad could it be?

Answer: pretty bad. Grandma was a hoarder, and her house is stuffed with useless rubbish. That would be horrific enough, but there’s more—Mouse stumbles across her step-grandfather’s journal, which at first seems to be filled with nonsensical rants…until Mouse encounters some of the terrifying things he described for herself.

Alone in the woods with her dog, Mouse finds herself face to face with a series of impossible terrors—because sometimes the things that go bump in the night are real, and they’re looking for you. And if she doesn’t face them head on, she might not survive to tell the tale.

THE TWISTED ONES combines the mundane drudgery and strangeness of cleaning out a hoarder's house with the fantastical creepiness of a technically-not-haunted forest with twisted rocks and strange effigies.

I appreciate the way that the framing clearly situates this as a story being told after the narrator and her dog have survived the events in question, it would be a monumentally more stressful story if I'd had to wonder whether the dog dies. The dread lies instead in the very large gap between surviving and escaping unscathed, and in the pages upon pages of descriptions of what was in this particular hoarder's house. It ratcheted up the tension by inches, as the intensity of the supernatural events increased periodically while the sheer volume and detail of the house's contents were a steady drip of very plausible weirdness.

The main character, Mouse, is a great narrator, with the quirkiness of specificity bringing a great style to her asides and characterizations. Bongo (the dog) comes through so well in her descriptions, doing things that make sense for who he is as a dog, even (or perhaps especially) when such actions complement the narrative as a thriller. The secondary characters are detailed enough to feel like full people without distracting from the main events, and I like the group who helps her out towards the end (Foxy's my favorite).

There's a particular litany, both read and thought by Mouse, which gradually turned into an earworm in my own thoughts in a way that makes the horror even more effective. It made it feel like the book was escaping its confines, or at the very least it makes it alarmingly plausible that Mouse could be just the latest in a line of people who became stuck on that refrain.

The ending is terrifying, bringing together the more mundane horror of a hoarder's house together with the supernatural elements in a fantastically scary climax. It had felt like the collection of stuff and the creepy things outside were two separate worlds but the meeting between them was one of the scariest things I've read in a while. The final scenes at the house are absolutely chilling, leading to an resolution that feels just as right as it is weird and sad. 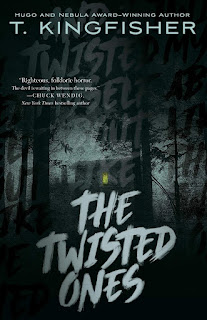