A Wizard's Guide to Defensive Baking by T. Kingfisher

Fourteen-year-old Mona isn’t like the wizards charged with defending the city. She can’t control lightning or speak to water. Her familiar is a sourdough starter and her magic only works on bread. She has a comfortable life in her aunt’s bakery making gingerbread men dance.

But Mona’s life is turned upside down when she finds a dead body on the bakery floor. An assassin is stalking the streets of Mona’s city, preying on magic folk, and it appears that Mona is his next target. And in an embattled city suddenly bereft of wizards, the assassin may be the least of Mona’s worries…

A WIZARD'S GUIDE TO DEFENSIVE BAKING is about a city so broken that the only one who can save it is a teenage baking wizard who should never have had to step up.

There's a lot of fun moments here, with many cool and strange ideas like "sentient sourdough starter" and "wizard who controls bread", though it's ultimately not a lighthearted story. It's sometimes zany, but the more Mona has to do to save everyone, the more she asks why it has to be her. Ultimately the answer is that everyone else who should have done something fucked it all up. That tension creates a mix of desperation and whimsy that is entertaining, thought-provoking, and very fun to read, then full of exhaustion as Mona is stretched beyond what she can bear with very little relief.

This author mostly uses this pen name to write thrillers and horror, so at first I was confused that something with this premise was published under T. Kingfisher. And then the other magickers began disappearing and I understood. With a little different focus and without the big battle, this would easily be a horror story. As it stands, it starts with a murder and continues steeped in death but doesn't quite have the full atmosphere (nor is it trying for that genre). It's dark and strange, in a "laughing while trying not to die" kind of way, with a meditation on the idea of medals and heroism that is truly moving.

I loved it and I wish it had a sequel, but for Mona's sake I hope this land never needs another hero. 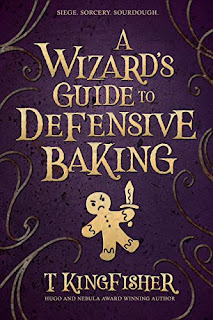