You know that feeling when you’re at work, and you’ve had enough of people, and then the boss walks in with yet another job that needs to be done right this second or the world will end, but all you want to do is go home and binge your favorite shows? And you're a sentient murder machine programmed for destruction? Congratulations, you're Murderbot.

Come for the pew-pew space battles, stay for the most relatable A.I. you’ll read this century.

I’m usually alone in my head, and that’s where 90 plus percent of my problems are.

When Murderbot's human associates (not friends, never friends) are captured and another not-friend from its past requires urgent assistance, Murderbot must choose between inertia and drastic action.

Drastic action it is, then.

NETWORK EFFECT finds Murderbot summoned to help various associates and not-friends who are in danger and in need of help, with lots of Targets to shoot and interfaces to hack.

As the first full novel in the series, Network Effect handles the transition from novella to novel beautifully. It expands the scope and feel of the characters while still keeping things connected to the earlier books. My favorite thing was the addition of new point of view characters, it was strange but cool to get perspectives other than Murderbot, especially since they have some very specific similarities while obviously being distinct characters. Murderbot itself was delightful as always, it’s really grown throughout the series in terms of relating to other entities and figuring out what it wants, slowly becoming proactive rather than reacting against what it was ordered to do before. As usual for Murderbot there’s danger, rescues and heist things, which were all great. It really feels like a longer version of a Murderbot book, which is perfect.

This doesn’t specifically wrap up anything from the previous books, but it does continue developing the definitely-not-friendship between Murderbot and Dr. Mensah, which is noteworthy given how little time they spent together this time around. The main storyline starts here and wasn’t present previously, it’s definitely its own story, with the main plot being pretty self contained. It’s not the last book, and at the end it clearly leaves something for later books to pick up as Murderbot starts to picture a life for itself and gets an unusual offer. I mentioned before that there are some additional narrators, because of plot reasons they have a lot of similarities to Murderbot, but they are differentiated in some cool ways. This would make sense if someone started here and didn’t know about the rest of the series. The first four novellas were a set telling a complete story, while this volume is pretty self contained. Everything you would need to know in order to understand what’s going on gets explained, partly because Murderbot has to provide some explanations since the other characters mostly were not around in the other books. That means that Network Effect technically could be read by itself, but if the plot description intrigues you you should definitely start with the first novella.

This is a great entry in a fun-to-read series about sentience, personhood, and self discovery in space and on various planets. 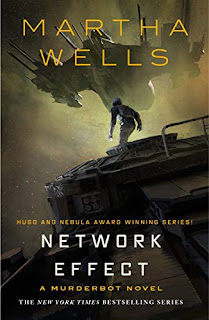