The Kingdom of Copper by S.A. Chakraborty (The Daevabad Trilogy, #2)

Nahri’s life changed forever the moment she accidentally summoned Dara, a formidable, mysterious djinn, during one of her schemes. Whisked from her home in Cairo, she was thrust into the dazzling royal court of Daevabad and quickly discovered she would need all her grifter instincts to survive there.

Now, with Daevabad entrenched in the dark aftermath of the battle that saw Dara slain at Prince Ali’s hand, Nahri must forge a new path for herself, without the protection of the guardian who stole her heart or the counsel of the prince she considered a friend. But even as she embraces her heritage and the power it holds, she knows she’s been trapped in a gilded cage, watched by a king who rules from the throne that once belonged to her familyand one misstep will doom her tribe.

Meanwhile, Ali has been exiled for daring to defy his father. Hunted by assassins, adrift on the unforgiving copper sands of his ancestral land, he is forced to rely on the frightening abilities the marid, the unpredictable water spirits, have gifted him. But in doing so, he threatens to unearth a terrible secret his family has long kept buried.

And as a new century approaches and the djinn gather within Daevabad's towering brass walls for celebrations, a threat brews unseen in the desolate north. It’s a force that would bring a storm of fire straight to the city’s gates . . . and one that seeks the aid of a warrior trapped between worlds, torn between a violent duty he can never escape and a peace he fears he will never deserve.

THE KINGDOM OF COPPER cashes in on the tension heralded by every political machination and twisted promise in THE CITY OF BRASS. Nahri, Ali, and Dara are at cross-purposes with each other and almost everyone else as Daevabad's brutality towards the Shafit begets more violence.

THE CITY OF BRASS set up a complicated system of alliances, slights, centuries-old grievances, and current injustices. In THE KINGDOM OF COPPER, the web gets a few more strands like slave auctions and mass murder of the oppressed, then pulls the strands tight to slaughter whoever gets in the way. It’s intricate, filled with conflicting allegiances, friendships, and hidden family. There’s some political theater, but almost every gesture carries behind it the threat of real violence against a plethora of minor and secondary characters, stacking death and misery higher and higher until the main characters can take it no more and the bloody showdown commences. There’s always another way that someone was terrible a long time ago and now a new person is ready to kill in the name of the long-dead. Three protagonists, all utterly convinced that their way of doing things is the one that will work, and a bevy of secondary characters all with their own deadly plans that cross and combine in unexpected ways to drench the city in blood.

I love the world building. A lot of the backstory was set up by the first book, but they live long lives and the pace at which new revelations occur is just right. In a world where there’s someone who knows what happened and might even have been there, it’s a matter of having the right protagonist ask the right question of the right person at the proper time… usually after a different protagonist tried to learn the same thing and was rebuffed. It’s a layered style that keeps any one character from knowing everything while making sure that by the time the reader gets the answer there’s been enough of a build up that it feels like a revelation. It even works when one character keeps trying to figure out something one of the other two already knows. Ali is my favorite, but together he, Nahri, and Dara combine to cover enough of the story’s angles to leave me very happy as a detail-hungry reader.

The pacing is excellent, the conclusion is stunning. I loved every minute and I’m ready to read the final book. 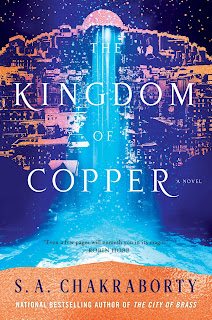