Go Tell It On The Mountain by James Baldwin

Go Tell It On The Mountain is about hypocrisy, loss, death, abuse, piety, pretense, denial, and self-delusion in a Pentecostal preacher’s household in 1930’s Harlem. The main story takes place in a day, with several vignettes reaching back.‬

John is navigating his sense of himself and his sexuality as a black teen in 1930’s Harlem. Because of when this was written there’s a lot that remains heavily implied, couched behind religious language and “holy” kisses. Some passages are shocking in their language, because the rest of the book is so carefully phrased, the few explicit sections have an impact that they might not have had otherwise.
John’s father (Gabriel) is a pastor whose religious devotion seems to have been unable to put a dent in his capacity to bring grief and pain to those around him. Indeed, the book seems to argue that it’s that very search for piety which created the ground for his abuses to flourish. I came to this book as an atheist and an ex-christian, and the depictions of the oscillating nature of Gabriel’s faith were familiar to me. He demanded reverence and piety from the women in his life, even while he was complicit with them (or was doing things they weren’t).

I read this book in under a day (today, in fact), and it’ll probably be one I read again.
Bookshop Affiliate Buy Link 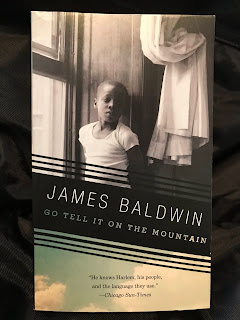