Animorphs Book 41: The Familiar by K. A. Applegate

Jake sees what happens to the future if he gets sloppy and/or gives up. It’s heart-wrenching, combining a grim visage with a small moment in a hidden garden. We also meet the Orr, an alien species I was looking forward to.

The interactions with each of the Animorphs are different blends of depressing, where this future glimpse shows Jake how completely he can fail if he messes up. The precarious nature of this scenario means its hard to know whether the stories he was told which then conflicted with his observations were because he was lied to for some reason or if some meddling occurred within the event.

There have been a lot of time-shenanigans recently, with this one feeling like a counterpoint to Megamorphs 4 (which looked at an alternate past instead of a possible future). I like them, I just had forgotten that they ramped up for a bit. 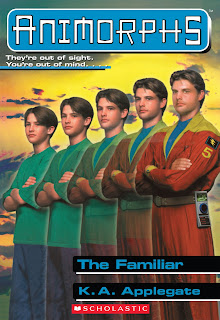